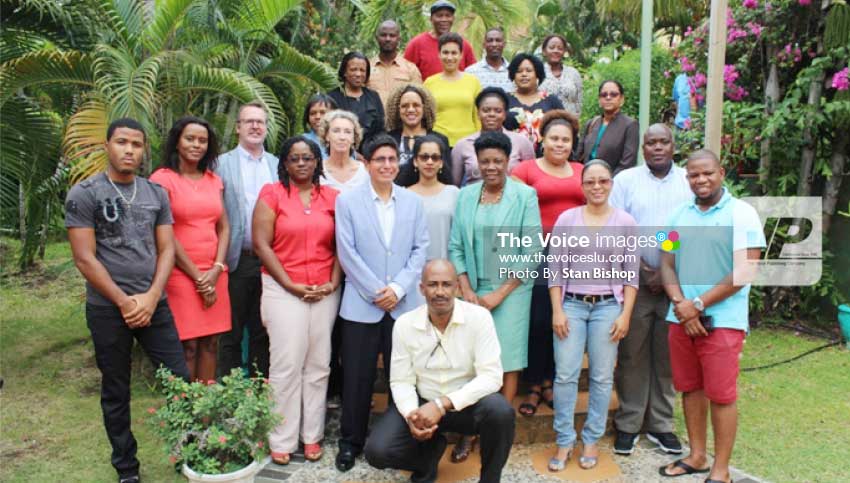 WITH the media being a crucial factor in telling the climate change story, every endeavour to tell that story as simplified as possible is equally crucial. Over the past weekend, nearly a dozen local journalists got the chance to learn how to do just that.

The all-day journalists briefing was held at Coco Palm Resort last Sunday and organized by the Government of Saint Lucia and the National Adaptation Planning Global Network.

The aim was to provide journalists with an understanding of the stresses to the country’s economy, jobs and infrastructure; insight into how the government plans to address those impacts through its National Adaptation Plan (NAP); updates on the status of international climate change negotiations; and tools, tips and advice on covering climate change.

During her opening remarks, Valerie Leon, Permanent Secretary in the Ministry of Sustainable Development, Energy, Science and Technology, said the island’s National Adaptation Strategy and Action Plan was developed with the tourism sector two years ago.

Leon said funding has been identified for the development of sectoral strategies and investment plans for the highest-scoring sectors, namely water, and agriculture and fisheries.

She added that funding will be sourced for other sectors, themes and areas, such as infrastructure and spatial planning; natural resource management, including coastal, marine and terrestrial; formal education and health.

Quoting a 2015 Global Ethics network post, Leon said: “Media of today is playing an outstanding role in creating and shaping of public opinion and strengthening of society. Media is the sword arm of democracy. Media acts as watchdog to protect public interest against malpractice and create public awareness”.

Throughout the years, especially during natural disasters, Leon said the media has been very supportive in covering environmental issues, including climate change. She said that while government continues to take the appropriate steps to build resilience and help address the adverse effects of climate change, the media’s role in telling the story must remain focused and clear.

“We depend on you to help raise awareness, change opinions, influence behaviour and galvanize the public into action for the environmental, social and economic well-being of the country and our people in the face of climate change,” Leon said.

Christian Ledwell, Media Communications Officer, National Adaptation Plan Global Network, told The VOICE that he expected to hear from the media what they have been reporting as it relates to climate change adaptation and what they expect from the government in terms of new stories and information that would help their reports. That expectation, he said, was met.

“I think we had a really excellent conversation about the fact that there’s already a lot going on,” Ledwell said. “What really stuck out for me was a real sense of peer collaboration with different journalists in Saint Lucia wanting to work together to tell the story better. They also recognize that climate change is a story that means a lot to Saint Lucians and affects them in their daily lives. So it’s just about telling those stories in a really compelling way.”

But do the media generally tell the climate change story effectively? While the media was already doing a good job, he said there are more stories and angles to climate change that need to be told in a simple manner.

“I think that there are a lot of really excellent stories that aren’t yet being translated into newspaper stories. Some of the science is quite complex, the international processes and negotiations are full of jargon and acronyms and can be very difficult to understand how it all relates to people’s lives,” he explained.

When asked about U.S. President Donald Trump’s stance against climate change, Ledwell said the momentum behind climate change adaptation and climate change mitigation is overwhelming and that countries are making really significant steps towards hitting their targets in terms of renewable energy.

Ledwell said the economy and the environment go hand in hand and not one versus the other, as the situation was in the past. However, he believes change is not occurring fast enough because “we’re still not cutting our greenhouse gas emissions quickly enough. But the momentum is pushing in the right direction now.”

“It’s just a matter of whether we can continue to raise ambitions and set more ambitious targets. Whether one country slows down that momentum, the momentum is really underway and there are lots of reasons to be optimistic that we can significantly curb our global greenhouse gas emissions and create strategies to prepare for the impacts of climate change,” he said.

Dawn Pierre-Nathoniel, Sustainable Development Environmental Officer, told The VOICE she felt that the objective of the workshop was met. In developing the NAP, she said that it was recognized that communications was important to clearly articulate and spread the message of climate change to the various audiences.

“We recognize that the media play a very important role in shaping outcomes, influencing ideas and thoughts, instigating action and effecting change across the populace,” she said. “In partnering with the media, we were able to see how together we can better understand and communicate that message of climate change effectively in a manner that would influence action as we continue to fight this whole phenomenon of climate change.”

She added: “Many of the journalists at the workshop made it clear that it was important to put a human face to things and present the message in a way that people can connect and identify with it.”

Pierre-Nathoniel said everyone should do his or her part in reducing the carbon footprint. She said switching off light switches after leaving a room, using energy-efficient appliances, and proper disposal of garbage, especially since the latter causes serious problems during heavy rainfall.

At the end of the workshop, journalists Bernard Fanis, OnelSandford-Belle and Alison Kentish highlighted some of their stories on the topic, showing footage of interviews conducted during natural disasters and soliciting responses from people who were affected.

Meanwhile, Janelle Norville of Choice Television won a trip to Guyana for a climate change media workshop scheduled for July 24-27. She beat out five other journalists who were challenged to tell a story on climate change adaptation drawing reference from what they felt were the most interesting elements presented and discussed at the workshop. Participants in the competition were also encouraged to simplify a case where the adverse effects of climate change disrupt community life.