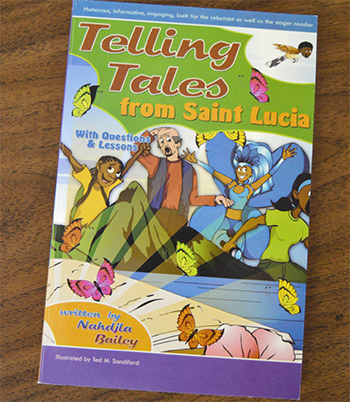 Wilbur appreciates his friends’ thoughtfulness, and replies, No. I have to do this on my own. Just make yourselves comfortable under that shady tree over there and have some patience. I’ve no idea how long this might take. And he bids them goodbye and takes off to where the action is, a bit further down the beach.

On getting there, he observes things very carefully, and thinks: Shall I take a greenhorn, or shall I go with an experienced daredevil? Ah well, I’d better go the whole way. I’ll take the daredevil. That old guy over there looks like he’s been around a long time. I think he’ll do. Good. He’s about to get strapped securely to the sail and tied firmly to the boat. Now’s my chance. That’s it. Onto his shoe… so far, so good.Now onto the bar of the sail. Huh! No trouble at all. Whoa! I’m already higher than I’ve ever been, and we’ve not even launched into the air yet.

Two minutes on, a shout of “Ready. Here we go!” and the daredevil parasailer and his unknown companion take to the skies. They are now a hundred feet or more above the ocean waves, and moving at quite a speed with no effort at all. The sun is setting on the Vieux-Fort Bay and the view is wondrous. Could anything be better than this? Wilbur asks himself. Now the daredevil rider calls out to the boatman, “Free-fall!” Immediately, the boat stops and the riders begin to drift downwards with the parachute. Just as they are about to get dunked in the water, WHOOSH, the boat takes off again and they’re back flying through the air once more. This is crazy stuff, shouts Old Wilbur. Absolutely unbelievable.Whata brilliant idea!

Just when Wilbur thinks he’s done it all, he looks down and sees that they are cruising directly over none other than his very own Maria Major. It looks only slightly familiar from so high up, and he is not able to make out any of his kind. He notices a few birds going in to land on the island, but that’s about it, except for the bright red blossoms on the flambeau trees.

Old Wilbur is having the time of his life. As far as he is concerned, he could stay up there all week long, if given the chance. But, even the daredevil rider has had enough, and it is now time to come in for landing. Once down, Wilbur takes up his former position, and is soon back on land and making his way along the sand towards his friends. They are both as excited as he is. They have watched every glorious moment of Wilbur’s ride and imagined themselves up there in the air with him. That was positively fantastic! exclaims Wilbur to his friends. You will have to try it sometime. I mean, it would be thought almost impossible for a whiptail to ever be so high up in the sky. But I did it, didn’t I?

Winston and Wilma are very happy for their old friend. After all, he is not going to live forever. In fact, he probably has just over a year and a bit left. Isn’t it great that he fulfilled his dream to conquer heights and take to the skies – even if just this once. There’s a lesson here for us,Winston, and for everyone else too, Wilma suggests. We should not be timid and weak-minded when it comes to following our dreams. We must be brave and bold and unafraid of challenges.

There’s another lesson too, adds Winston. When we feel something is impossible, there is very likely a way to achieve it after all, if only we go ahead and think about it carefully and plan for it wisely.

Old Wilbur cannot be more pleased at this point. He has had the time of his life and more than that, his young friends have learned a very important lesson without his having to say a word. What is that old saying he’s heard from Don John on more than one occasion? Oh yes, ‘Actions speak louder than words’. I see exactly what he means.

Time now to make their way back to the jetty. How will they get across or – even more to the point, when? No big deal. After all, they are a group of daring adventurers, and they’ll cross that bridge when they come to it!