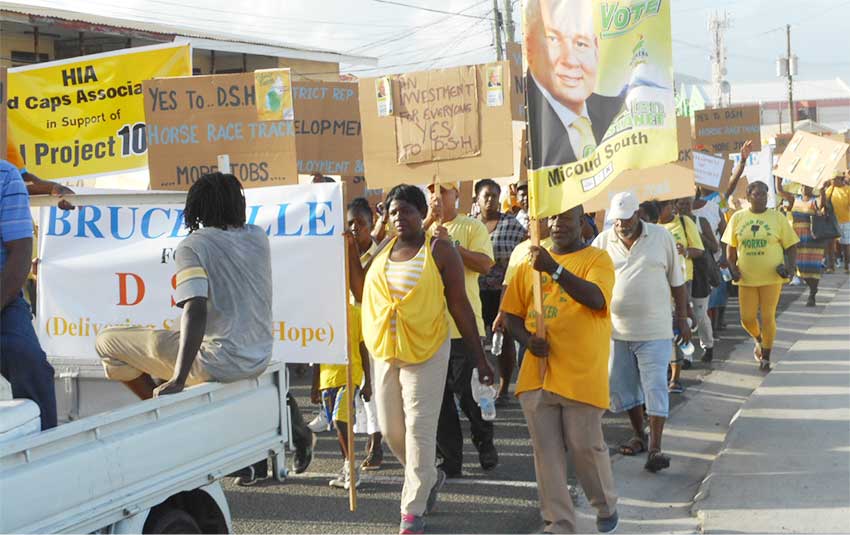 THE chanting refrain from participants at a solidarity march on Wednesday afternoon in Vieux Fort as they marched along the main streets to show their support for the Desert Star Holdings (DSH) project was deafening: “We want jobs! We want jobs!”

The march, which followed a general meeting by the United Workers Party (UWP), was organized by the Vieux Fort Coalition of Stakeholders for Development.

Participants carried placards which carried messages such as “Vieux Fort has been rejected too long,” “Protect what matters the most — people” and “Jobs, jobs, hotels and more…”

Felix Deterville, chairperson of the Hewanorra International Airport Red Cap Association, told The VOICE during the march that the vast majority of its members support the DSH project, adding that such an investment will provide much-needed jobs for residents of the south.

“The DSH project will improve the livelihood of Vieux Fortians and, by extension, the entire island,” Deterville said.

The speakers at the meeting did not mince words in criticizing the Saint Lucia Labour Party (SLP) for “opposing progress”. Their speeches, which were punctuated with wit and humour, had the upbeat gathering’s full attention.

In a hard-hitting speech in which some startling revelations were made, Minister for Economic Development, Guy Joseph, questioned the rationale for marching for snakes when human beings were suffering.

He added that some of those who are marching for snakes could not even send their children to school or pay their hospital bills.

He called on St. Lucians to bear with the government as it tries its best to open the new St. Jude Hospital as soon as possible despite the stumbling blocks in its path created by the former administration.

He added: “This government has already committed $80 million in this year’s budget to be spent on the St. Jude Hospital.”

According to Joseph, the previous administration was building a hospital without Development Control Authority (DCA) approval. He said the government has submitted a plan for the hospital to the DCA and is now awaiting its stamp of approval.

Joseph said two containers which contained equipment for the hospital and were at Port Castries for two years had accumulated storage cost of $166,000. This, he said, was reduced to $46,000 after the government negotiated with the other party involved.

He added that there are another four containers in Canada, which the person who ordered them, wants to give the government a hard time to get here. However, he said he has since demanded that they be shipped here because they were paid to be shipped to St. Lucia.

Prime Minister Allen Chastanet, who described Vieux Fort as the “new capital of St. Lucia”, urged Vieux Fortians to support the DSH project, stating that it will change their lives in a positive way.

“Vieux Fort will be the envy of the Caribbean. We will be at the forefront of one of the best racing tracks in the world,” he said.

He said that while the SLP was accusing government of bad deals and doing things without Cabinet approval, the former prime minister allegedly sold Black Bay lands for $3.00 per square foot to a foreign investor.

As it relates to the controversial Desert Star Holding’s ‘Pearl of the Caribbean’ project, he said, “Teo Ah Khing will be putting his own money in the horse racing track.”

Chastanet indicated that hope was still alive for St. Lucians because the government has a number of projects on-stream, such as the construction of hotels and the revival of the ailing banana industry.

“SLP has no voice. They have had their chance,” Chastanet said.

Among the other government ministers who spoke were Minister for Health, Mary Isaac; Minister for Agriculture, Ezechiel Joseph and Minister for the Public Service, Lenard Montoute. They all urged participants to continue supporting the government and not be swayed by the rhetoric of the St. Lucia Labour Party.

Residents of Vieux Fort also made brief remarks, accusing Dr. Anthony of “killing” the town. They said it was his poor representation that has led to a number of business-houses in Vieux Fort to close, including the loss of jobs at the Vieux Fort dock.