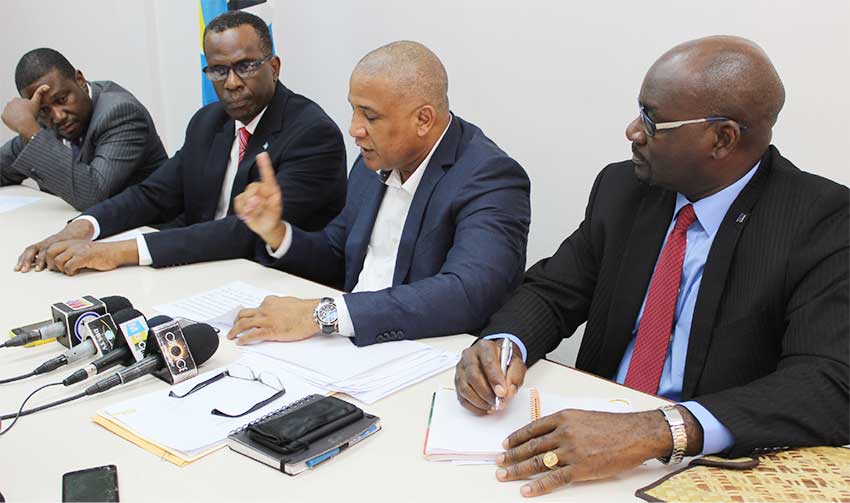 THE Opposition St. Lucia Labour Party (SLP) has described the turnout at last Wednesday’s protest march in Castries as “testimony to the rising national resentment at the direction in which this new Government is taking Saint Lucia”.

Political Leader Phillip J Pierre at a press conference yesterday further challenged the government to come clean on the DSH project since it involves the people.

“This is not a single hotel project but a major project involving over 900 acres of mainly public lands, which will affect a national reserve and force the relocation of hundreds of citizens. It involves offering thousands of Saint Lucian passports for sale which will affect the identity and sovereignty of our people. This is a national issue with huge repercussions for generations yet to come,” Pierre told reporters.

Pierre said the most telling factor was the vicious treatment of those who dare to voice opposition to or raise any concerns with the actions of the Government.

“It started with abusing the media when questions were asked during the visit of Prince William. It continued with the treatment of the NICE workers and members of the National Trust and, most recently, the reaction by government ministers to the statement by the Catholic Church on the DSH project that eventually caused an apology by His Grace the Archbishop,” Pierre said.

In thanking St. Lucians for turning out in the numbers they did last Wednesday, Pierre said the turnout was a demonstration of how quickly people had lost trust in the UWP government and how ready they were to publicly display their outrage at the vindictiveness and arrogance of the government, particularly at perceived supporters of the Saint Lucia Labour Party.

“It is also clear that there is no consistency, accountability or transparency in the way the Government deals with the people. There are many examples (DSH, CIP and Dolphin Park) on how the Prime Minister and the Government say one thing today and another thing tomorrow. The Saint Labour Party has said from the start, and continues to say, that we are not against investment and jobs. We started the negotiations on DSH and tried our best to get a deal that was fair and reasonable for the developer and for the people of Saint Lucia. What was signed by the Prime Minister is a bad deal. It is grossly unfair and reckless. We called for a renegotiation of the DSH deal and repeat that this is necessary. If the Government is in fact renegotiating with the developer then they must let the people know the details of what has been agreed,” Pierre said.

The government, Pierre notes, constantly changes its story on DSH and abuses anyone that criticizes the contradictory statements that they announce.

“No one knows what to believe when the Government speaks on DSH. There is no trustworthiness. The explanations from the Government are causing more confusion than clarity. The huge turnout at the protest was further evidence that Saint Lucians do not agree with the Government handling of the DSH project,” Pierre said.

As to what comes after the march, Pierre said his party will intensify its efforts to get transparency and accountability from the government on the DSH project.

“Firstly, we call on Government to create the atmosphere where there can eventually be national consensus on such a huge project. This must entail frank and open dialogue with all relevant interest groups in the country — political parties, National Trust, affected residents, farmers and others whose livelihood will be affected, particularly those living in the south of the country.

“Secondly, the Saint Lucia Labour Party will be engaging all civil society partners to continue to voice our concerns and suggestions on how the project can in a sustainable way cater to the concerns of the people. We will also seek to engage the government in a direct way.

“Thirdly, we will continue our public town hall and community meetings to educate the people on the consequences of the DSH project.

“Fourthly, we will prepare for further protest action if the Government continues to ignore and brush aside the concerns of the people of Saint Lucia. Accordingly, we will be discussing with the Police various options for peaceful protest action in the event that it is needed.”