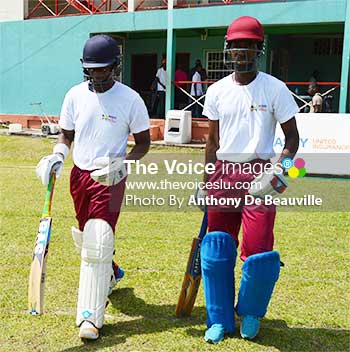 With a crowd of over 400 students — mainly from the Leon Hess Comprehensive Secondary School in attendance, Sir Arthur Lewis Community College won the toss, batted and quickly amassed 309 for the loss of five wickets off their 50 overs and then dismissed their opponents for 134 in 35 overs.

Captain Wayne Edwards of the SALCC team, younger brother to Windward Islands orthodox left arm spinner Larry Edwards, stroked a boundary-filled 102 to lead his team’s batting. He struck six fours and six sixes in his onslaught. He figured in an opening stand of 196 with Jarde Goodman who contributed 80, which included eight fours and two sixes.

Other contributions came from Denzel James (40) and Tyler Sookwa undefeated on 50, which included three sixes and five fours.

Bowling for Leon Hess, UdellPreville, a national Under-15 player, took 2 for 98.

In reply, Leon Hess found themselves in early trouble, slumping to 21 for 4 before a fifth wicket partnership of 96 between Jaden Elibox (46) and Mateo Bologne (34) propped up the innings momentarily before they were bowled out for 134.

For SALCC, Alli Scott was the chief destroyer, picking up 3 for 28 and opening bowler Azeymyah Celestin did the early damage, claiming 2 for 20.

Wayne Edwards was named Man of the Match for his 102.