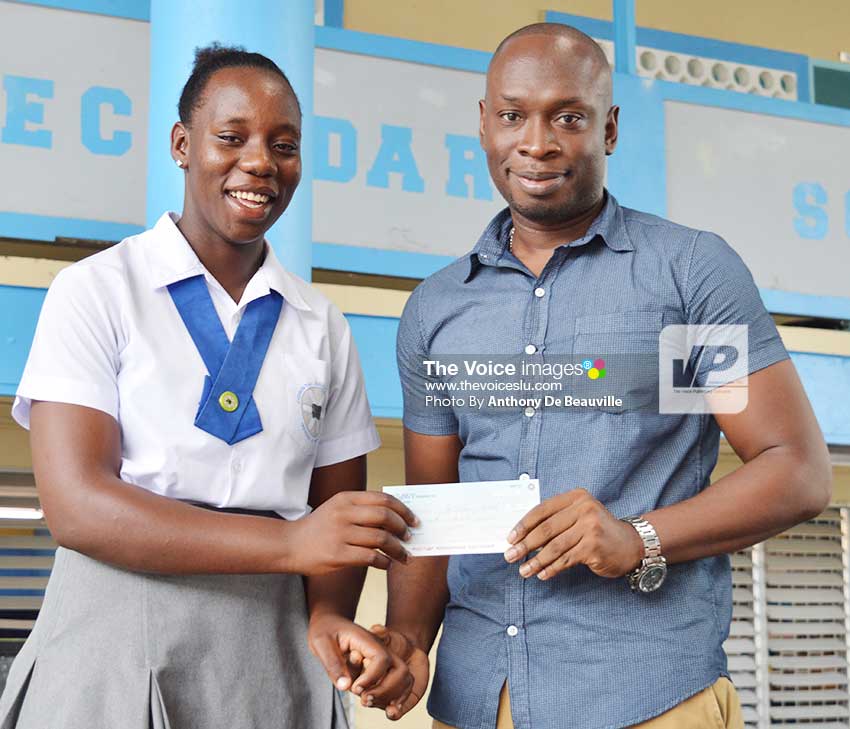 THE Corinth Secondary School on Wednesday morning held a grand ceremony to honour on of their students, West Indies teenage cricketer Qiana Joseph.

The 16-year-old will be leaving Saint Lucia tomorrow to join the rest of the West Indies Women’s Team for training camp in Barbados ahead of the Women’s World Cup.

Present at the recognition ceremony were Ministry of Education representative, school principal Willard Andrew, along with staff and students, sponsors and two of Joseph’s family members.

“We are very proud of her as this is a significant achievement for a 16-year-old student, not just from Corinth Secondary but from Saint Lucia. We want to recognize her fittingly. We have a number of sponsors who are presenting a few gifts and timely financial donations to her so that she could make the transition to international cricket,” Andrew said.

He added: “If you do something for one student, you are automatically doing it for other students to emulate and see that they can make it as well, if they set their goals high with discipline and hard work. It’s really for Qiana, but at the same time it’s the student body.”

Digicel representative, Louise Victor noted that, “Digicel has a very special relationship with the WICB as title sponsor of the team. We celebrate your success — not just the fact you made it to West Indies team, but all that you have accomplished. It really would have prepared you for this moment.”

Massy United Insurance presented Joseph with a Lenovo tablet which enables her to continue doing her school work and email it back to the school while on tour with the West Indies team in England.

CEO of Vizions Entertainment, Edward Fedee, presented a cheque for $3,300 collected during the quarter and semifinals stages of the 2017 Vizions Super League held at the Daren Sammy Cricket Ground.

Fedee said, “The tide of opportunity is always at its peak once in a lifetime. If you take it, you can ride the wave for the rest of your life. That is your opportunity; you now have to determine what you want to do with it. It’s all in your hands. I was touched by Qiana’s story and felt that the organization had to make a contribution.”

In her speech, Joseph thanked God for guiding her during her struggles and challenges at tough times.

“He has been and still is a great source of strength. To be considered as one of the team members of the West Indies female cricket team is a great honour,” she said.

“Without any of you, today would not be possible,” she said.

“To my sponsors who have shown an overwhelming outpouring of support throughout my journey with your generous contribution, my way forward will be unlimited. For those who have touched my life till now, I am truly grateful. Words cannot express my appreciation to each and every one. Sincerely, a big thank you.”