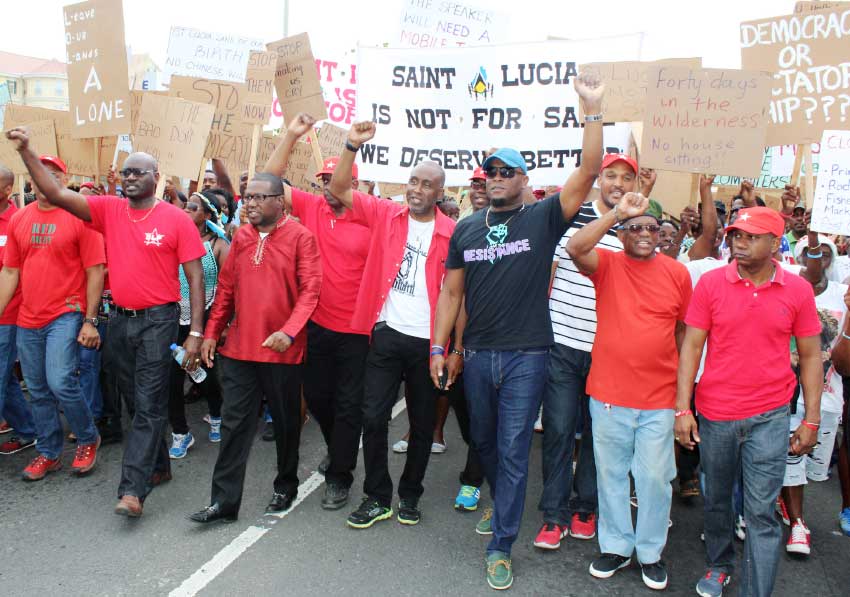 Traffic crawled for a bit then came to a complete stop at about 3:30 p.m. between the Jeremie Street Junction and the Sab Playing Field in Vigie as supporters of the march — organized by the SLP-flooded the area near the field.

The lively atmosphere increased and the march got underway after 4:00 p.m. flowing along the route from the playing field into the heart of the city to end on the Castries Market Steps for a rally.

The march was held primarily to condemn the agreements signed between the Government of St. Lucia and Desert Star Holdings and the alleged vindictiveness of the government towards certain persons, groups and organizations, the Labour Party said.

Chaos ensued as party officials tried to get people prepared for the march. Police officers were seen attempting to take care of the traffic as people scrambled to get placards which came to the field by the truck-load.

Bob Marley’s battle cry, “Get Up, Stand Up”, roared from hi-fi speakers mounted on one of the flat-bed trucks. It rained intermittently but the sun won out in the end.

Red shirts for party supporters and white t-shirts for those under the banner of Concerned Citizens of St. Lucia, the group that joined forces with the Labour Party, dominated the clothing attire of the marchers.

Yesterday’s march coincided with another in Vieux Fort which supported the government’s policies for development in that area.