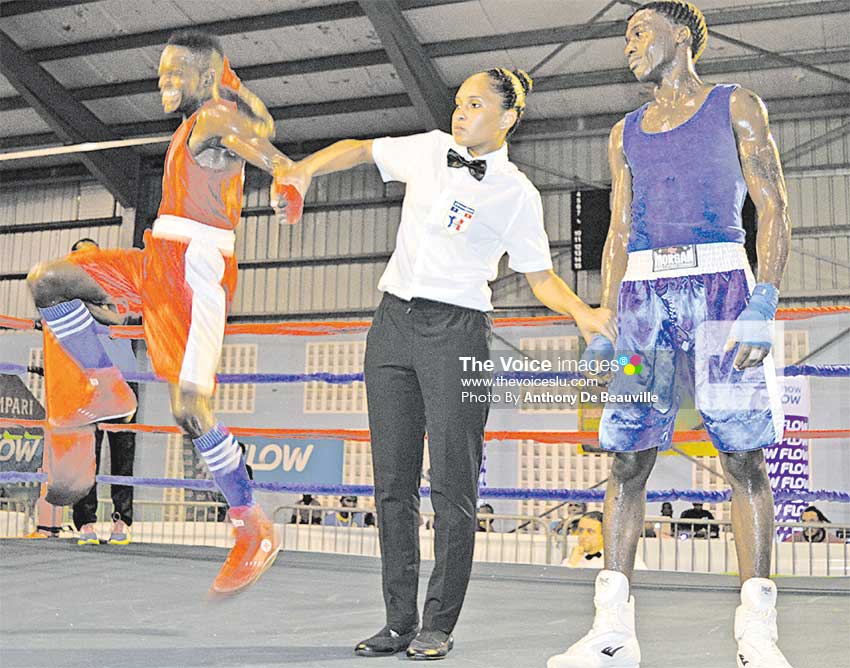 ELITE boxer and team captain Lyndell Marcellin marshaled Team Saint Lucia to victory on the final night of competition of the 2017 OECS Boxing Championships held at the Beausejour Indoor Facility on Saturday.

Marcellin won a unanimous decision over Charles Leatham of Dominica. Kareem Boyce also walked away with a gold medal but from a special bout over Nelon Cyrus of Grenada.

Marvin Anthony, another Saint Lucian boxer, medaled on the night, winning silver against Keithland King of Saint Vincent and the Grenadines; the previous night he defeated Joshua Redhead of Grenada.

Junior Boxer of the Year Nathan Ferrari, competing in the Light Welterweight class for the first time, went down to a more experienced Guadeloupe boxer Jean Phillip-Erin via a split decision.

On Friday evening, despite Saint Lucia losing three out of the five fights contested, the small crowd at the BIF was electrifying as they responded with loud shout “Let’s Go Saint Lucia, Lets Go, Knock Them Out Lucia”, to almost every punch thrown in the ring.

In the first matchup, Saint Lucia’s Marcus James went down to Uriah Desilver of Antigua and Barbuda with Coach Conrad Fredrick throwing in the towel.

Jerome Joseph of Grenada defeated Kareem Boyce of Saint Lucia with the referee stopping the contest in round two.

Rufus Vesprey of Grenada outclassed Kibwana James of Antigua and Barbuda with referee Cecil Kerr stopping the fight midway into the second round.

Jwevel Marty of Saint Lucia proved too much for Justin Soriano-Franco of Antigua and Barbuda. With both boxers exchanging a series of punches in the first round, Marty switched into high gear going into the second round as he overpowered Soriano-Franco only for referee Aubrey Blackett to stop the contest.

In the Light Heavyweight (75-81 kg) class, Timon Gilbert gave Grenada their third win when he won a unanimous decision over DelroyJno Charles of Dominica.

In the first split decision of the championship in the Light Welterweight (60-64 kg), division Nathaniel Joseph of Dominica defeated Jarvis Regis of Grenada.

Kiomel Miller of Barbados (Welterweight (64-69 kg) made light work of Lance Robinson of Antigua and Barbuda.

In the Heavyweight (81-91kg), Antigua and Barbuda’s SenethilkumarMurali-Mohan lost to Dariel Sylvester of Grenada.

In the Super Heavyweight (91+ kg), Shevon Lewis of Grenada defeated Leran Regis from St. Lucia. It was a first time boxing card for Regis.

In the Middleweight Class (69-75 kg Elite), Keithland King of Saint Vincent and the Grenadines proved too much for Dominica’s Roy Cooke, with referee Julie Bonnett stopping the fight midway in the second round.

In the final fight on the night, Middleweight (69-75 kg Elite), Marvin Anthony kept Saint Lucia in gold medal contention when referee Richard Brathwaite stopped the fight after Grenada’s Joshua Redhead abandoned the match in the second round.

Next on the Saint Lucia Boxing Association’s calendar is the most-talked-about Creole Boxing Championships scheduled to be held in July where Cayenne, Martinique and Guadeloupe will join a number of the teams from the region.