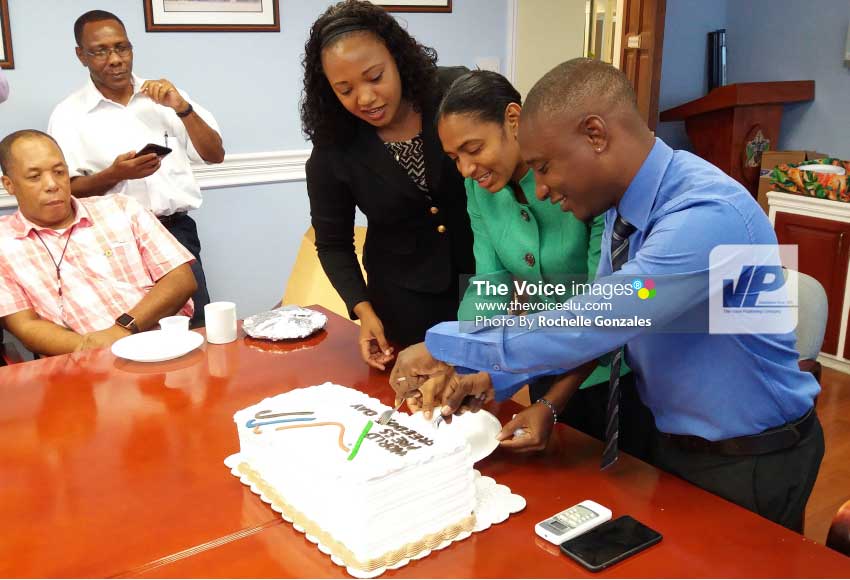 MEMBERS of the media were subjected to some light-hearted trickery on Tuesday morning after they were duped into thinking that they were attending an important press conference at the Office of the Prime Minister.

Upon arrival, media members realised that they were in fact guests of the OPM to celebrate World Press Freedom Day which was observed yesterday under the theme “Critical Minds for Critical Times: Media’s role in advancing peaceful, just and inclusive societies”.

While accepting the gesture, President of the Media Association of St. Lucia (MASL), Miguel Fevrier, reminded fellow media colleagues that “Freedom in the press is now more important than ever”, and that they should not be sidetracked into thinking that they needed to pick sides when confronted with such gestures.

Fevrier said in a press statement that was read out on the same day: “A free press stands ready to defend society from this menace by ferreting out shining strands of truth from the murky depths, piecing together half-truths from politicians and spin doctors (both paid and unpaid). A free press scrutinises those in power and contrasts rhetoric with actions, throwing empty promises into stark relief. A free press pulls back the curtains and spills sunlight into corporate boardrooms, making businesses accountable to the consumers who are the source of their profits. From Watergate to UK phone hacking to the Flint, Michigan poisoned water scandal, the press serves its role as watchdog, sounding the alarm when things aren’t right.”

Shortly after the MASL President made his speech, The VOICE questioned Mc Donald about why the approach was taken to surprise the members of the media as opposed to making them know what they were attending.

Mc Donald said it was all part of her impish plan to get as many media workers as possible to show up to be a part of the celebration. She said the OPM wanted to recognise the contribution of the media in St. Lucia

Mc Donald said: “I am very mischievous and as a fruit as a media coming out of the media fraternity, I very well knew that if I sent an email saying something big was happening, everyone would show up. It was important for me to just get you guys to enjoy being around each for a little while to mingle. We saw the Acting Prime Minister join us this morning, Honourable Lenard Montoute, so it was important for me, for you all to get that dynamic where you can mingle with our officials, as well as have some down time before you start your day.”

Looking at the theme, Mc Donald said the government and the media both have roles to play, and in some cases are working towards some of the same goals; therefore, it was vital to maintain a relationship.

She said: “It is essential that we have a very active and vibrant media in St. Lucia to keep the government on its toes at times, and you know what? We welcome that!”

World Press Freedom Day is an initiative that was conceptualised by the United Nations General Assembly in 1991. Since then, May 3 was designated to raise awareness of the importance of freedom of the press and remind governments of their duty to respect and uphold the right to freedom of expression enshrined under Article 19 of the 1948 Universal Declaration of Human Rights and marking the anniversary of the Declaration of Windhoek, a statement of free press principles put together by African newspaper journalists. (Source: Wikipedia)

According to Wikipedia, “UNESCO also marks World Press Freedom Day each year by bringing together media professionals, press freedom organisations and UN agencies to assess the state of press freedom worldwide and discuss solutions for addressing challenges. Each conference is centred on a theme related to press freedom, including good governance, media coverage of terrorism, impunity and the role of media in post-conflict countries.”