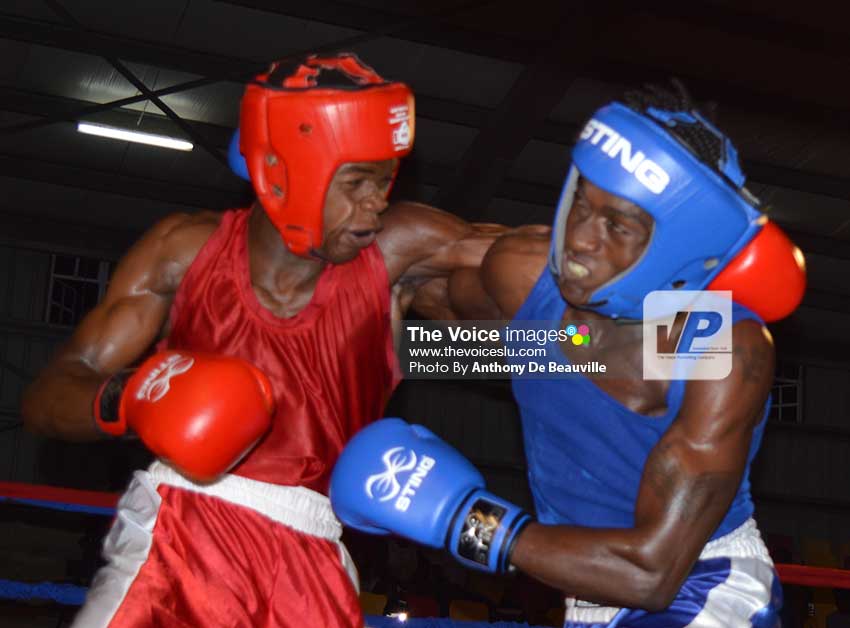 The three-day tournament commenced last evening at the National Gymnasium.

The squad reads: Nathan Ferrari (captain, who was awarded the Best Boxer at the tournament last year), Kareem Boyce, and Kimlyn and Jwevel Martie. While in Guyana, the four boxers will be managed by Head Coach Conrad Fredericks.

At the OECS Boxing Championships, Ferrari won a silver medal in his fight against Jean Phillipe-Erin of Guadeloupe in the light welterweight division.

Boyce, on the opening night, lost to Jerome Joseph of Grenada in the Lightweight category but came back strong on the final night to defeat Nelon Cyrus of Grenada in a split decision to win the gold medal.

Debutant Kimlyn Martie lost to Rufus Vesprey of Grenada when the referee stopped the fight in the second round.

Jwevel Martie was good on the night in the middleweight class to win against Justin Soriano Franco of Antigua and Barbuda.

Meanwhile, Saint Lucia’s Julie Bonnet, who recently received certification as an AIBA One Star Referee, has been invited to officiate at the championships.

President of the SLBA, David Christopher, said, “Following Saint Lucia’s victory at the recently-held OECS Boxing Championship, the squad went straight into preparation mood. The team spirit is high and the four boxers are expected to give great representation at the championships.”

Christopher expressed gratitude to the Saint Lucia National Lotteries Authority and the Saint Lucia Olympic Committee for funding the team`s participation at the Guyana-held championships.

Team Saint Lucia is expected to return on Tuesday.

Next on the SLBA calendar of events is the Creole Boxing Championship in which over 150 boxers from the French and English Caribbean will compete at the Beausejour Indoor Facility.