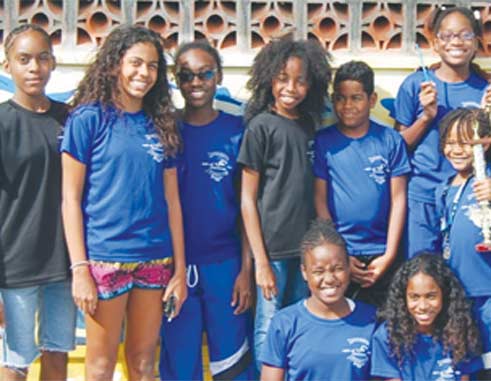 THE members of the Lightning Aquatics (LA) Swim Club continued to fulfill its Mission Possible drive with a donation of two hampers to the residents of the Comfort Bay Senior Citizens Home in Vieux Fort.

The donation was made on Saturday, April 22, which also happened to be the annual observance of Earth Day.

LA’s President, Tessa Charles-Louis said: “Apart from collecting books at our Award Ceremony held earlier this year, we encouraged each swimmer to contribute non-perishable food items, toiletries and cleaning products. The decision to donate to the Comfort Bay Home was simple as we saw it as an ideal opportunity for the swimmers to bask in the beauty of the south while spending quality time with the elderly.”

The welcoming staff at the Home gave parents and children a tour of the peaceful and immaculate facility and allowed for the interaction between the club and residents. To top off the visit, LA Swimmers performed a dance to Teddyson John’s “Allez” which received a hearty round of applause from the elderly.

Earlier that day, the club participated in a tour of the picturesque Maria Islands Nature Reserve in observance of Earth Day. The tour gave the youngsters and parents, many of whom had never visited the island previously, an opportunity to learn about the endemic species found there as well as the work of the Saint Lucia National Trust in preserving the rich and rare biodiversity of the islands.

According to LA member, Chloe Thomas, “The boat ride to Maria Islands was exciting. It was a captivating experience because I could see the beauty of the Atlantic from the top of Maria Major.”

LA Swim Club has more exciting activities for its members geared towards their development into well-rounded athletes with a greater appreciation for their community and the environment. For more information on how to join this family-oriented, club please visit us on Facebook: Lightning Aquatics Swim Club.