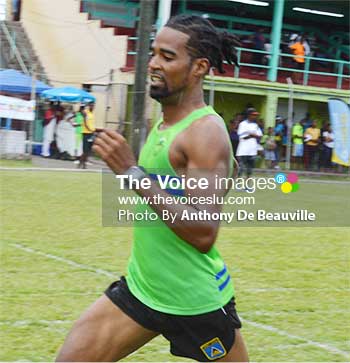 FOOTBALLERS aged 5 to 13 years in La Clery now have something to look forward to every Saturday morning, thanks to the official launch of the Grassroots Programme held last Friday. The young players will be engaged in a series of developmental football sessions on the La Clery playing field.

The effort was initiated by the Saint Lucia Football Association (SLFA) through its Grassroots football programme coordinator, Victorin Lawrence. Four of the six league affiliates registered into the programme as the SLFA enforces its licensing drive which mandates that every club affiliate must have a vibrant youth development programme.

The VOICE spoke with Coach Darren Fessal about the programme and the way forward for the sport in the community.

“We’ve always had a number of young players on a Saturday morning. Now that we have a more structured programme, we intend to work feverishly to implement and execute the plan that we are mandated by the league that will not only benefit La Clery football, but see well-groomed young citizens as well.”

He said over 50 young energetic footballers turned out for the programme.

“We have a few girls who usually come around on afternoons to train. But presently, it is a challenge. We have no changing rooms for the women. We cannot have young girls playing in these kinds of environments and not have the basic amenities. This is a major area of concern for us; it is a setback for us. I simply hope at some point that issue can be rectified,” he said.

The coaching staff also comprises Fabian Wells and Steven Leroy and their goal is to ensure they have better men and women in the community through sports.

Fessal said that only a few years ago La Clery was a force to be reckoned with in local football. With such a programme in place at the moment, he said the objective is to build champion clubs within the community and from within those clubs they are hoping to get quality players to represent La Clery at the highest level.

“Former national player Gilroy Hall will be working with all the clubs within the community and, hopefully, he will be able to take us to the next level. At one time, we used to have teams and players come in, play for one season and move from this club to another. But right now, we have a structure in place. The clubs now have to follow the SLFA and FIFA regulations and, hopefully, in the not too distant future, we will be one of the top ranking clubs/leagues in Saint Lucia,” Fessal said.

Following the launch, the players participated in several basic skills and small-sided games. The club coaches also received balls and bibs from the SLFA which were presented by Secretary of the La Clery Football League, John Sealy.

The clubs are to provide a schedule of training for the youth programme and the SLFA has also expressed interest in the development of girls’ football in the community.