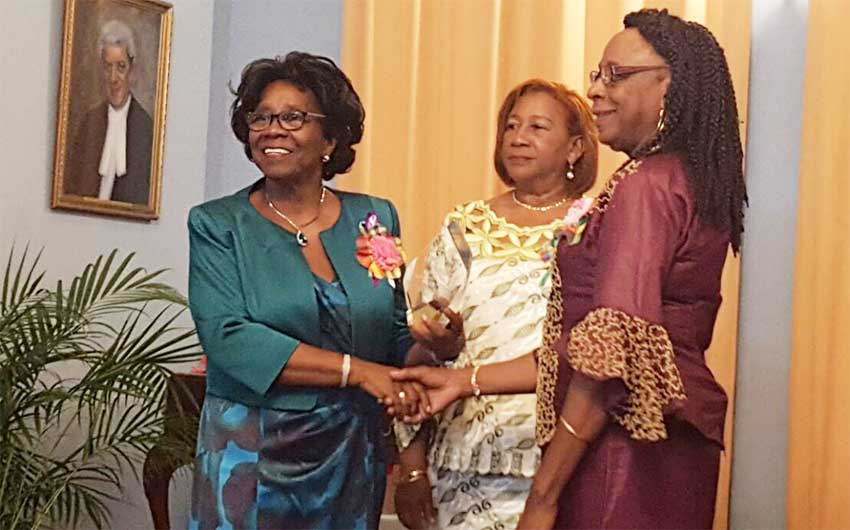 LES Danseurs Traditionnels De Ste.Lucie is proud and honoured to introduce to the public its new Patron, Denise Joyce Auguste.

Launched in February 1984, the folk group this year celebrates its 33rd anniversary. One of the highlights of its celebrations was the installation of its new Patron with a ceremony that was held on Friday April 21, 2017 at the residence of the Governor General under the distinguished patronage of Her Excellency Dame PearletteLouisy.

The decision to have a Patron to guide the fortunes of the group was taken about eight years ago during the review of the Group’s Constitution, after which an exercise to identify a suitable candidate to fill the position was undertaken. The late Cypriani Frank Norville, who was a well-known cultural activist, was identified and selected as someone befitting the ideals of the group. Norville was not only a friend of the folk group, but also a former member.
Since Norville’s passing in 2015, the group members again embarked on the arduous quest to find a suitable replacement.
Patrons of Les Danseurs are Honorary Members and are selected based on their interest in the development of culture in St. Lucia, their significant contribution to the development of culture and their influence on Saint Lucian society.

It is because of Auguste’s outstanding contribution to the development of music and her involvement in bringing awareness of our culture to the St. Lucian populace that the members of Les Danseurs Traditionnels De Ste.Lucie found her to be the most fitting candidate to play the role of Patron.

Auguste’s passion, appreciation and development of St. Lucia’s folk music led to her vast research of the culture. Her interests also spanned festivals, particularly La Rose and La Marguerite, where she recorded their music for preservation and promotion and for creating an understanding and appreciation of its richness.

During this time, she met with Dame Sessenne Descartes, whose voice and musical compositions she introduced to the public outside the environment of their conception. In addition, she considered extending the music in arrangements which enhanced their preservation without losing their originality.

Over the years, Auguste’s contribution to Saint Lucia’s cultural community would include the creation of the choral group, Hewannora Voices, numerous recordings, documentaries and publications, and the further development of music in schools across the island.