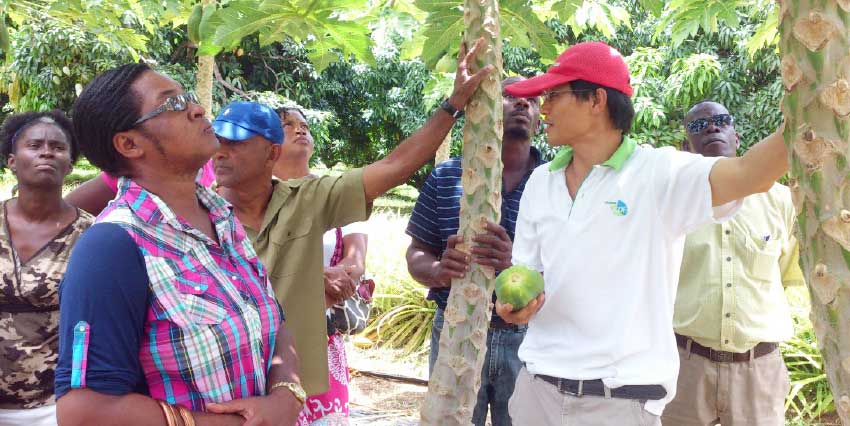 PRESS RELEASE – ST. LUCIAN farmers are singing the praises of the Republic of China (Taiwan) for assistance and advice which they have been receiving that has enabled them to combat disease, increase production yields and generally begin to look at the agricultural sector in a positive light once more.

Taiwan is supporting efforts by the government of St. Lucia to revitalize the once vibrant agricultural sector which has been overtaken by tourism as the island’s biggest income generator.

The centre-piece of the new effort is the restoration of the banana industry which in the recent past has been decimated by the dreaded Black Sigatoka disease that brought both industry and farmers to their knees. Once known by the sobriquet “green gold”, bananas was responsible for the rapid economic and social development that St. Lucia experienced, especially in the 1970s and 1980s.

Taiwan invested US$1.8 million in a Black Sigatoka Prevention and Treatment Project that recently came to an end with the news that the disease has been brought under control, the infection rate has been reduced from 70 percent to 20 percent, and banana production increased with the resultant improvement in the livelihoods of participating growers.

During the life of the project, short-term Taiwanese experts provided prevention techniques and helped to modify cultivation management practices, while the Ministry of Foreign Affairs of Taiwan provided funding to build facilities and establish a revolving fund that supported the purchase of chemicals for onward distribution to banana producers.

The achievements of the project have been many apart from those cited earlier. They include the strengthening of the agricultural sector’s diagnostic capacity and specialized training to technical laboratory personnel in St. Lucia and Taiwan, and the provision of modern laboratory equipment and supplies to the Research and Development Division (RDD). Under the project, between 120 and 150 farmers were trained in 2014 and 2015, while over 50 technicians were exposed to good agricultural practices in treating, controlling and managing Black Sigatoka. In some instances, these initiatives were undertaken in collaboration with Taiwanese experts from the Taiwan Banana Research Institute (TBRI).

Several farmer-based demonstration plots were also established to highlight to the farming community some good agri-business, agronomic and resource management practices. These plots were utilized as training sites to promote diversification options and mixed cropping systems with bananas.

St. Lucian farmers have voiced their praises for the project. Stephen Best, whose banana farm is located in Richfond, Dennery, said the assistance from Taiwan has been “invaluable” in fighting Black Sigatoka. He said: “Fighting this disease is a huge financial burden for banana farmers, so the assistance from Taiwan has been most welcome. When the disease broke out here, we didn’t have the necessary methodology for controlling it and it wreaked havoc on our farms. We have to commend the Taiwanese for coming to the rescue when they did. They have contributed to a large extent in saving the industry.”

Best, who has been planting bananas for the past 20 years, said that as a result of the Taiwanese intervention, he was now looking forward to the future of the banana industry with renewed confidence.

“In the absence of this assistance, we cannot imagine how difficult it would have been to remain in production”, Best said.

Another farmer, Peter John, who operates on seven acres in Vanard, admitted that his business was doing much better now with the Taiwanese input. He spoke of the construction of a bridge which had turned out to be a vital piece of infrastructure for farmers in his community.

Taiwan’s involvement in St. Lucia’s agricultural sector is as old as its diplomatic ties with the island which started in 1984. One of the immediate benefits of that association was the establishment of an agricultural mission based at Union, which propagated new strains of fruits and vegetables, such as water melons, mangoes, passion fruit and sweet peppers, and the introduction of new production techniques to St. Lucian farmers.

Now ongoing is the second phase of a new Fruit and Vegetable Demonstration and Extension Project in which Taiwan is investing US$750,000. That is expected to be completed by the end of 2018.

This project hopes to promote fruit and vegetable businesses to reduce the dependence on the banana industry, as part of the agricultural diversification effort and to achieve the goal of increasing the incomes of farmers.

Under this project, Taiwan is helping improve the technical capacity of the Ministry of Agriculture in the promotion of agricultural diversification by training 1,950 people. By the end of April, this project had implemented 486 field technical advisory services for 39 farmers, held two technical workshops and two farmer field schools, established two farmer demonstration fields and provided seedlings and soil preparation services to farmers.

Troumassee, Micoud farmer Wayne Marcellin is one of the beneficiaries of this project. With three acres planted with watermelon, eggplant, lettuce, cucumber, spinach, he is getting ready to add ground provisions to his production line. He commended the assistance farmers had been receiving from the Taiwanese, saying it was saving farmers a lot of expenditure.

In Richfond, Dennery, Kennedy Constantine grows bananas, plantains, and a variety of vegetables as well. As a result of the Taiwanese help, he said, there have been marked improvements in both the quality and quantity of his products.

“They (Taiwan) have helped me introduce new technologies like irrigation and compost systems to my farm that have worked wonders for me. I did not have the finance to go forward with these new developments but the Taiwanese helped me to go forward and I am very grateful,” said Constantine, who has been in farming for the last 17 years.
(Editorial Services Feature)