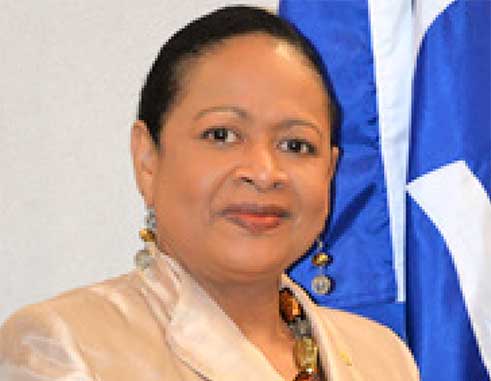 THE Council of The University of the West Indies (UWI) approved the appointment of Ambassador Dr. June Soomer as the new Chairman of the Open Campus Council at their annual meeting on Thursday, April 27, 2017 in Barbados.

Ambassador Soomer assumes this post after the untimely passing of former Chairman, Sir K. Dwight Venner in December 2016. Ambassador Soomer is charged to formally guide the strategic, financial and administrative affairs of the Open Campus within the University’s new strategic direction, regional priorities and global initiatives.

A St. Lucian by nationality, Ambassador Soomer is a historian by training and experience with diverse experiences through her work in the diplomatic, financial and education sectors in the Caribbean and internationally. She currently serves as the Secretary General to the Association of Caribbean States (ACS).

With over 30 years of academic and professional experience functioning at the managerial, operational and technical levels, Ambassador Soomer has developed a solid understanding of contemporary development issues and continues to advocate for equality and equity in sustainable development, especially for the Caribbean region.

Ambassador Dr. June Soomer received her Ph.D. in History from the University of the West Indies in 1994. She was the first female to graduate with a doctorate in History from the Cave Hill Campus of the University of the West Indies. Her thesis entitled “An Assessment of the Factors Affecting the Structure and Functioning of The British West Indies Federal Civil Service, 1947-1962”, commenced her deep passion for regional integration and has directed her career path.

Ambassador Soomer has several publications to her name, including “The Social Pillar of Integration”, in Caricom Perspective 1992-1993 issues; “Cricket and the Politics of Integration” in Liberation Cricket: W.I. Cricket Culture; “Perceptions of Risk Factors Related to Cancer, Venereal diseases and AIDS among Barbadian Women” as joint author with Dr.Funmilayo Jones (forthcoming); “Comparison of Non-Governmental Organization’s Submissions and Positions on Regional Issues with those included in The Report of the West Indian Commission, Time for Action” for the Caribbean network for Integrated Rural Development, 1992; “Cricket and the Origins of Federation Organization”; An Area of Conquest: Popular Democracy and West Indies Cricket Supremacy for Ian Randle Publishers in 1994 edited by H. Beckles; “The Politics of John Compton: Its Impact on the Political Future of St. Lucia” in a joint paper with Cynthia Barrow Giles in the Bulletin of Eastern Caribbean Affairs for ISER in 1996; “Runaway Slave Women in the Windward Islands” in Slave Women in the Americas, by NC University Press in 1997; The Manipulation of the Production and Reproduction of African Women in the Caribbean during Slavery, in Negro History Bulletin, Vol. 63, Issue 1-4; and “The Magna Carta and the Notion of Rights in Post Slavery, Post-Independence Caribbean Countries”, which is a forthcoming publication.

She has also made several academic presentations in the region and globally, dealing with historical, socio-economic and gender-related issues. Some of these include The Magna Carta and the Notion of Rights in Post Slavery, Post-Independence Caribbean Countries at the Magna Carta Lecture Series held in St. Lucia in February 2015; “Stiff-backed Spines:” The Militancy, Defiance and Plain Speaking of Enslaved Women in Saint Lucia and the Caribbean at The UWI Open Campus St. Lucia Open Campus Country Conference in June 2015; and The Relevance of Arthur Lewis to the Contemporary Challenges facing Small Island Developing States, in Durban, South Africa in 2015.

The leadership, staff and students of The UWI Open Campus welcome Ambassador Soomer as their new Campus Council Chairman and wish her much success as she assumes this new position.