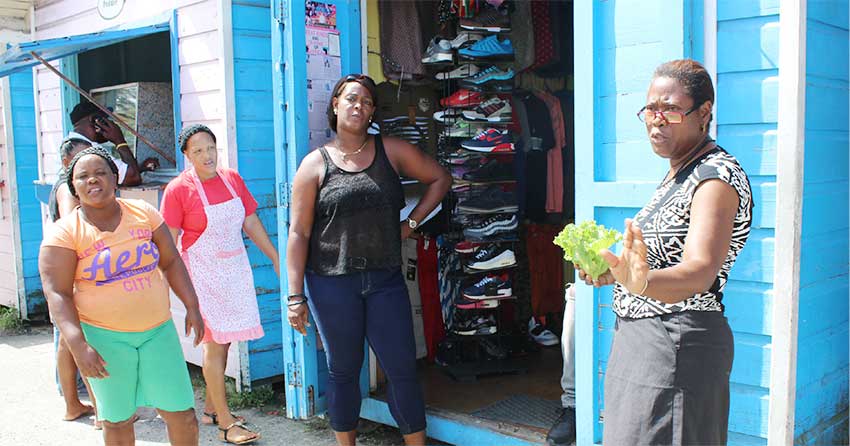 THE Castries Constituency Council (CCC) has plans to remove vending huts from Jeremie Street it built some years ago as part of a move to clean up the sidewalks from unsightly structures and eradicate crime in the city.

The huts identified for removal are those between Mr. Ray’s business establishment and Recaii’s Wholesale, and were built by the CCC during the Stephenson King-led government (2007– 2011) under the watch of Richard Frederick, Minister for Local Government at the time.

The huts are occupied by vendors selling various types of merchandise and were at one time viewed as an enhancement to Jeremie Street.

However, Castries Mayor Peterson Francis said the huts and other structures along that street provide hidden spots that are used by criminals to indulge in felonious activities.

But vendors renting some of those huts had some sharp words for the Mayor, claiming that he never approached them to discuss the matter.

“They say we provide shelter for criminal elements. That is not true. We cannot prevent men gathering at the back of the huts or between them when we have closed shop for the day,” said one vendor, who did not wish to disclose her identity.

Francis said those to whom the huts are rented to refuse to pay their rent.

“Their home expenses are paid for. They are not victims of repossessions by banks or other institutions, yet they refuse to pay their rent on the huts that provide them with the means by which they take care of their homes and other possessions,” Francis said.

However, a vendor yesterday said this may apply to some vendors, not all, since he has all his bills and can prove he is not in arrears to the CCC.

Another vendor threatened to go to Francis’ office with her cup, plate and pan for him to feed her children if he destroys the hut she’s renting as this is her only means of income.

“Last week Friday, police officers came to us and asked us our names and numbers so that the mayor can get in touch with us. We have not seen him. If he removes us, where will he put us,” another vendor said.

Peter “Ras Ipa” Isaac, President of St. Lucia Craft and Dry Goods Association, is not happy with plans to remove the huts at this time, noting that Francis had failed to identify suitable or even temporary relocation for the vendors.

According to Isaac, when the idea to build the huts was first mooted, he had concerns which were linked to plans to develop Castries since such plans, if they came on stream, would cause the huts to be removed. However, now that there are no such plans, he said there is no need to remove them.

“What is the mayor trying to achieve by taking such action against the little people who are contributing eight percent to the gross domestic product, who are not seeking employment but who are not considered as unemployed and who make up 27 percent of employed St. Lucians? The vendors contribute to his salary. Why is he after them,” Isaac said.

Francis is also targeting booths and wrought iron structures that dot sidewalks across the city, claiming that they provide cover for criminal activities and serve no purpose to the Council.

His idea for the city is for vendors to have better-looking structures to display their goods in, structures they could carry with them at the end of the day, thereby leaving the sidewalks clear for pedestrians.

However, Francis is not all about clearing the city sidewalks of structures erected by vendors. He has vowed to do all that’s in the power of the CCC to eradicate crime in the city and make the place better for St. Lucians to traverse.

His statements were made in light of several shootings around the city in recent days, especially in Castries East which falls under the jurisdiction of the CCC.

Francis denounced the upsurge in gun violence in the country and extended condolences to those who have suffered and are suffering from the violence.

“We (CCC) want to assure the public that the CCC will do all in its power to try to curb crime and make the city a better place,” he said.

In an attempt to make the city safer, the Council has selected another batch of people for training to be officers of the city constabulary. Francis said he is looking at bringing the constabulary’s strength up to 50 officers to provide adequate enforcement of the city’s bye-laws.

“Criminal activities in the city could be curbed if citizens speak out when they observe a crime taking place,” Francis he said.

He said there are certain crimes that occur in full view of the public on Jeremie Street. People, he said, just stand still and look at what is taking place and do nothing to either stop or prevent it.

“Is it our (CCC) job to stop crime? Is it the job of the mayor, the job of the police or the city police? What is the public doing? If they do not volunteer information on something they see, where do we go from here? We have to work with the public — that is the only way we could solve crime and stop the violence,” Francis said.