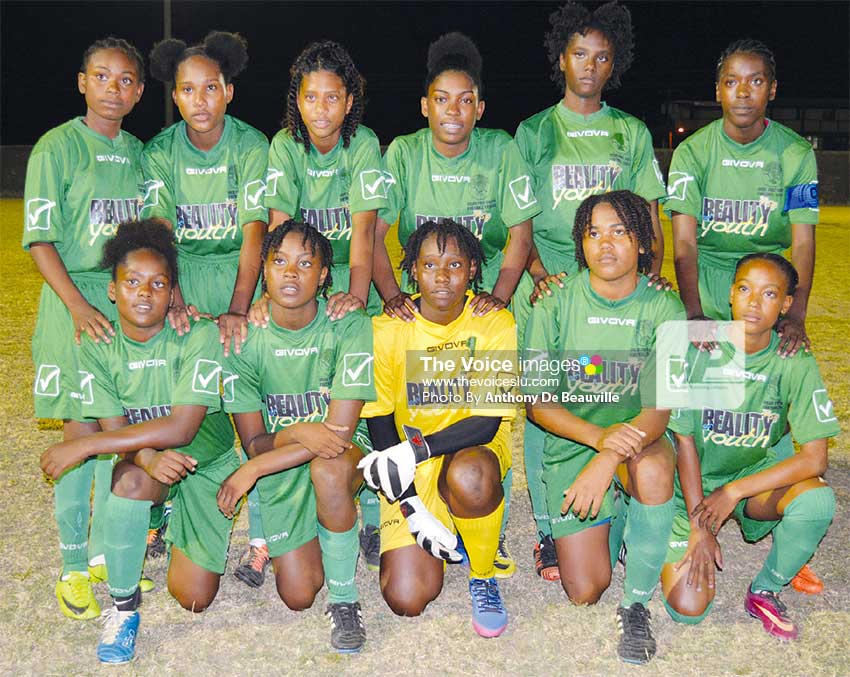 IT was a goal feast on Saturday evening at the Phillip Marcellin Grounds in front of an appreciative crowd of football fans as Soufriere and Vieux Fort South booked their spots into the final of the Saint Lucia Football Association’s Under-16 Women’s football competition with wins in the semifinals round over Gros Islet and Marchand respectively.

But not before Nicofia Joseph (beaver trick) and SanchaAlcide (hat trick) of Soufriere and Krysan St. Louis (hat trick) of Vieux Fort South — all three of them national under-15 players — made life difficult for the opposition goalkeepers.

In the first match of the double-header, Marchand went down to Soufriere 11-0. At the end of the first half, it was clear that Soufriere was the superior team leading 5-0 with goals from Sacha Alcide in the 5th and 10th minutes and a hat trick from Nicofia Joseph in the 24th, 26th and 27th minutes.

On the resumption, Casandra Shepard made it 6-0 in the 50th minute, JoniyaCharlmagne put Soufriere further ahead in the 51st minute and Nicofia Joseph scored her fourth in the 54th minute to make it 8-0. Sasha Alcide scored her third goal in the 61st minute and earned her career hat trick. Casandra Shepard found the back of the nets for the second time to make it 10-0 in the 71st minute while Nicofia Joseph scored her fifth in the 78th minute to send her tally of goals to 14 in the tournament.

Vieux Fort South’s prolific goal scorer Krysan St. Louis scored a hat trick with goals in the 40th, 44th and 83rd minutes, taking her tally of goals to 13 in the tournament, one shy of tournament leading goal scorer Nicofia Joseph of Soufriere (14).

Ilana Lashley was also good on the night and her agility on the pitch proved too much for Gros Islet, resulting in her opening the goal scoring spree for her team in the 15th minute. She went on to score another in the 47th minute of play to the delight of the many VFS fans present in the stands.