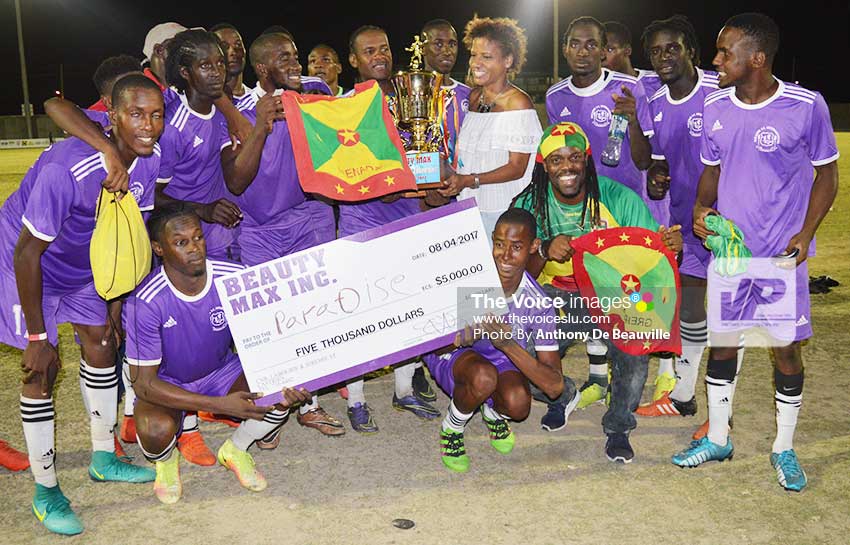 From 6:30 p.m. South Castries play Marchand while at 8:30 p.m. Dennery come up against Mabouya Valley.

On Sunday, before a capacity crowd at the Soufriere Mini Stadium, the National Under-21 and Canaries played to 1-1 score after regulation time but not before a player from each team was taken to the Soufriere Hospital following two separate unfortunate tackles.

Delon Neptune put the National Under-21 team ahead when he hit home a loose ball which eluded the Canaries goalkeeper. With 1-0 down, Canaries increased the pace of the game but failed to change the score-line by halftime.

Canaries came out firing on all cylinders in the second half and Bradley Tisson’s 64th minute header equalized, much to the joy of Canaries fans. However, the dangerous tackles on the square resulted in 5 yellow cards being issued by the referee to canaries players.

In the second encounter Soufriere did not disappoint their followers and despite numerous scoring chances went on to defeat Anse la Raye 1-0 with a goal scored by Nickson David in the 16th minute of play. Referee Garnet Felicien issued 6 yellow cards and 1 red during the match.

On Saturday, the competition opened with a capacity crowd of close to 2500 fans at the Phillip Marcellin Ground as one of the championship favourites, Vieux Fort South, defeated Gros Islet 2-1.

VFS’ Antonius Myers scored in the 35th minute of play to start a mini celebration which was shortlived as Gros Islet responded five minutes later with Aramis Lorde making it 1-1 to leave the scoreline even at the half.

Going into the second half of play, and with added pressure, VFS’ Antonio Joseph scored their second goal in the 52nd minute.

With one goal down, Gros Islet continued to press on for the equalizer, but in the process in doing so lost their manager, who was sent off by the referee in the 62nd minute for an exchange of words them the bench.

Vieux Fort South lost a player as Gregson President was sent off in the 78th minute for two bookable offences resulting in a red card being issued to him. With VFS playing with one man short, Gros Islet looked to take advantage and press on for the equalizer, but missed out on two clear chances on goal in the 80th and 87th minutes respectively. VFS goalkeeper, Leon Alexander failed to clear a loose ball going a cross goal just a couple of inches away from him, and the other also went freely across goal with no Gros Islet player in position to tap the ball in.

In the second match on night, dubbed the “Champion of Champions”, last year’s Super League Champions, Micoud came up against Paradise FC champion club of Grenada.

The much-anticipated matchup ended with Paradise FC being crowned the Champion of Champions with a 2-0 win with goals from Irvine Smith in the 62nd and Saydrel Lewis in the 86th minute respectively over a highly-fancied Micoud team.

Despite winning the encounter, the boys from the Spice Isle made to fight hard for the $5000 prize money and the championship trophy at stake. Nevertheless, Micoud played like real champions but Paradise FC was able to get sweet revenge for last year’s defeat at the then Beausejour Cricket Ground.