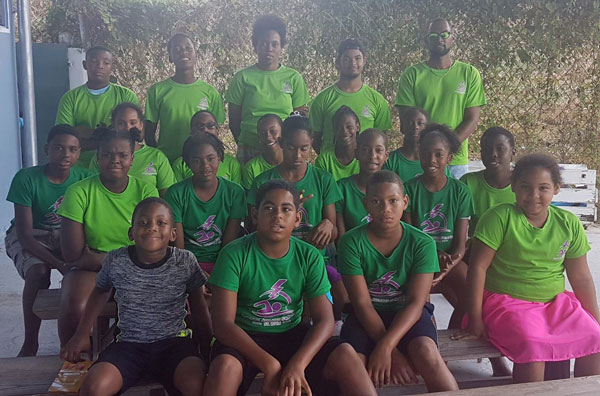 With a contingent of 23 swimmers from ages 7 to 23 years, the Lightning Aquatics Swim Club amassed 289 points, placing 9th out of 25 teams participating in the 18th Rodney Heights Aquatic Centre (RHAC) Invitational Swim Meet held in Saint Lucia from April 6 to 9.

It was four days of tough competition from 320 swimmers from Antigua and Barbuda, Barbados, Grenada, Saint Martin, Saint Vincent and the Grenadines, Trinidad and Tobago and Saint Lucia.

According to LA’s Club President Tessa Charles-Louis, “While there is always room for improvement, we are extremely proud of our swimmers who gave it their all despite the challenging competition from regional competitors. Many of them recorded personal best times and we are particularly thankful to our three coaches for their dedication to the club.”

Naima Hazell won the Sprint Challenge and 6th overall in the Girls 11-12 age group, getting 3 gold medals and breaking 3 meet records in the 50-metres freestyle and 50- and 100-metres breaststroke. She also won silver in the 50-metres butterfly.

Naekeisha Louis placed 3rd in the Sprint Challenge and 5th overall in the 11-12 Girls age group, earning silver in the 50-metres breaststroke and bronze medals in the 50-metres freestyle and 200-metres backstroke.

Also in the Girls 11-12 age group, Aliyah Henry won gold in the 200-metres breaststroke while Courtney Paul copped bronze in that event.

“Our first attempt at staging a swim meet received rave reviews from swimmers and parents alike,” said Charles-Louis. “Five of the seven clubs on island took part. What made it extra special were the fun relays, especially those which saw parents and coaches displaying their swimming abilities in the presence of the athletes.”