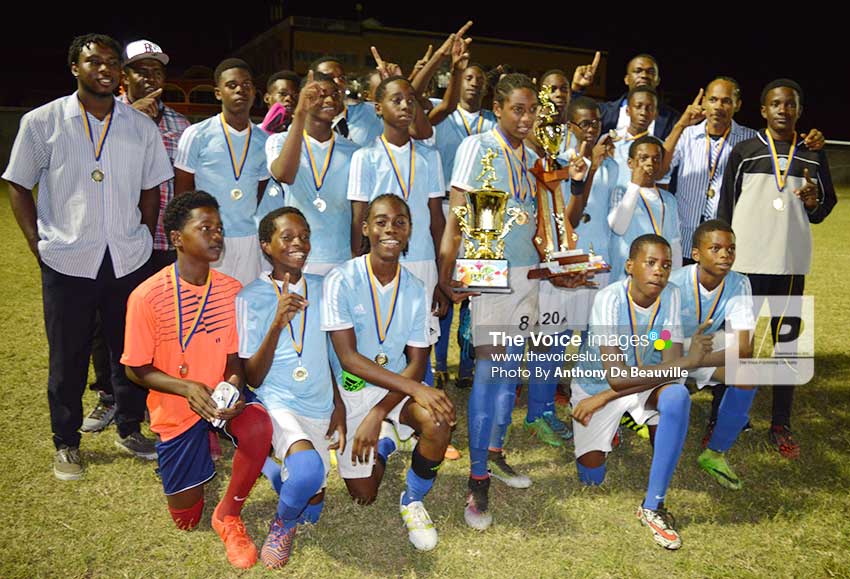 With a crowd of well over 700 patrons at PMG, the encounter generated much excitement and gave football fans all the reasons to stay fully engaged throughout the entire encounter.

Gros Islet had their first big chance in the 36th minute of the game when a Mabouya Valley player committed a foul in the penalty area. However, Jeremiah Justin’s powerful right foot shot and placement hit the inside of the crossbar.

Eight minutes later, and on the stroke of the halftime whistle, Gros Islet’s persistence paid off as Mabouya Valley’s lack of decision-making in defence allowed Simeon Francis to nick one past the MV custodian in the 44th minute to take hold of the halftime advantage.

The resumption of play saw both teams upping the tempo even, but it would be Gros Islet who would go on to seal the victory and take a first grab with an 84th minute free kick by Jahlil Evans which eluded the Mabouya Valley goalkeeper.

Meanwhile, Shermon Augustin of Gros Islet was showed a red card by Referee Andrew Phillip in the 90th minute of play for leaving the game to take on the Mabouya Valley fans in the stands in what appeared to be jeering of his family member.

Oneil Hippolyte put Canaries ahead in the 21st minute when his right foot shot eluded the VFS goalkeeper to keep that score-line until the half time whistle. Despite several raids on goal by Vieux Fort South, the Canaries goalkeeper YariLansiquot was equal to the task between the uprights.

On the resumption, the VFS team switched into high gear and got the much-deserved equalizer in the 63rd minute through Riquelime Elva. Four minutes later, Jefferson Jones put VFS in the lead to start the celebration both on and off the field.

Meanwhile, Kenson Casimir, Managing Director of Saint Lucia Sports Online, stressed on the importance of the tournament and how pleased he was with the outcome. He also thanked the SLFA and other sponsors for coming on board to allow the young men an opportunity to display their talents and skills.