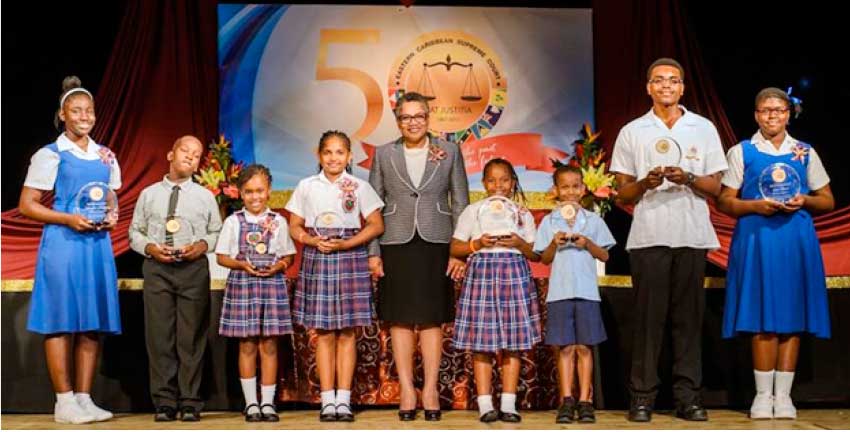 In celebration of the 50th anniversary of the Eastern Caribbean Supreme Court (ECSC), the Court last week held an awards ceremony for its essay and poster competition dubbed “An evening with the Chief Justice.”

The event gave Dame Janice M. Pereira, the Chief Justice, an opportunity to motivate and inspire children to think more clearly, assess their opportunities, and pursue their dreams. The ceremony also provided an opportunity for her to speak directly to the students about a number of matters pertaining to the Court, including the history of the ECSC, how the court system works and the difference between the High Court and Court of Appeal in each member state and territory.

In attendance were Dame PearletteLouisy, Governor General of Saint Lucia, judicial officers of the Court of Appeal and High Court, staff of the Eastern Caribbean Supreme Court’s headquarters, members of the public and private bar, principals, teachers, parents, and over 520 students from primary and secondary schools from Saint Lucia and Montserrat.

The awards ceremony was held at the National Cultural Centre at Barnard Hill in Castries.

The following students were awarded:

The Eastern Caribbean Supreme Court (ECSC) was established in 1967 by the West Indies Associated States Supreme Court Order No. 223 of 1967. The ECSC is a superior court of record for the Organization of Eastern Caribbean States (OECS), including six independent states, namely Antigua and Barbuda, the Commonwealth of Dominica, Grenada, Saint Kitts and Nevis, Saint Lucia, Saint Vincent and the Grenadines and three British Overseas Territories (Anguilla, the British Virgin Islands, and Montserrat). The Court has unlimited jurisdiction in each member State