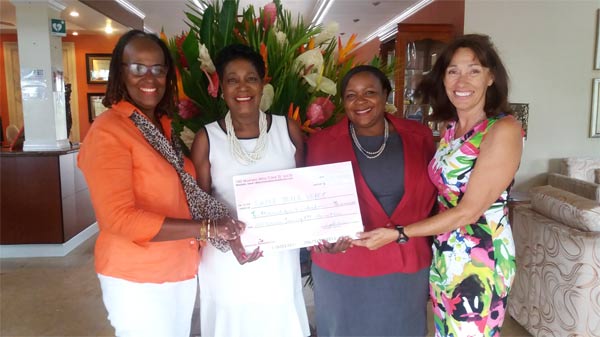 BOLDNESS and change are two difficult proposals to deal with in this 21st. Century, mainly because people lack the basic understanding or are fearful of what they really mean. However, both concepts are very relevant today, if life is to be lived successfully and abundantly.

Sometimes boldness is taken to the extreme where people just don’t care about the feelings of others, or about the consequences of their actions. For example, some young ladies express their boldness by parading themselves wearing nothing but paint and shoes. Others presume to show their boldness by engaging in sexual intercourse in open spaces, even in the presence of total strangers. Both examples indicate some measure of change as well, but I am definitely sure that the organisers of the International Women’s Day 2017 had anything but these notions in mind.

Today’s woman stands on the threshold of a brand new world which she has a major hand in shaping. Her actions and attitudes will definitely decide the direction of this world and the eventual lifestyle that ensues. Women today wield a lot more influence than they have experienced for centuries, but it seems that the real driving force behind this level of influence is ill directed and not producing the expected results.

Before I go any further, I grab this opportunity to congratulate our women for the tremendous progress that they have generally made over the years, and this is a very apt opportunity to challenge them to move beyond the status quo by breaking out into new fields of endeavour, and going where no one has gone before in thought and deed.

A lot of money has been spent on programmes to empower women since 1975, and while there have been very tangible benefits from these programmes, there are many women who seem bent on maintaining the status quo by refusing to change their mind-sets. They remain quagmired in a dependency syndrome, and refuse to see themselves capable of achieving any semblance of emotional and or financial independence. Some have more than enough money to live comfortably, but they cannot see themselves as capable of achieving success without a man, even if that man is abusive towards them, her children and her property. This seems to be a deep seated neurosis which has plagued our St. Lucian women in general, even when they exhibit outward trappings of feminism and bravado. A proper analysis of this problem is desperately needed if our society is to get back on an even keel.

One needs to be very appreciative of the international help which has propelled many women to reach the pinnacle of success, and while we have been quick to blame men for the ills of society, we cannot ignore the part played by women tacitly or explicitly in helping men to continue their macho approach to life, and the domination they exercise over women. There are women who literally beg men to dominate and abuse them, even in spite of friends and relatives who try to make them open their eyes to the beauty that an abuse free life can bring. Men would not have been so abusive on such a grand scale if women were not accommodating the abuse. I say this without fear of contradiction. Statistics indicate that when women stand up for their rights in a bold and forceful manner, men either back down or run to seek greener pastures. The trouble is that we do not see enough of this in St. Lucia.

What society needs today is more women who are prepared to stand boldly for their God given rights irrespective of who takes offence. Sometimes it is a mother or mother in law who will encourage a young spouse to put up with abuse, even temporarily, in exchange for material wealth. Such an attitude simply emboldens the abusers to carry out their dastardly deeds longer and more intensely. One such mother was heard counselling her daughter to put up with her husband’s cheating and verbal abuse because he continues to pay all bills and provides the necessities of the home. Isn’t this short circuiting the progress that women were supposed to have achieved since the advocacy started in a grand way in 1975? Think of it.

Family life in St. Lucia has taken a downward spiral because men realise that they can get away with a lot of evil by wielding the money weapon. Mothers knowingly allow their teenage daughters to be sexually abused by known men in exchange for money and other fringe benefits. There are several reported cases of mothers selling their school aged daughters to men who agree to provide books, uniforms and other necessities like money. The result is that these young women are robbed of their innocence by the very person who should have moved heaven and earth to protect it. Unfortunately, they never recover from this assault, and when a genuine loving husband marries such a woman, he unsuspectingly is made to pay severely, because he has bought damaged goods. Many men are now facing this kind of crisis because these women generally find it difficult to reciprocate love, and turn the marriage into a nightmare.

One may argue that the financial crisis we now face is responsible for such reckless behaviour, and that some women have no other options, but is it not true that such behaviour is condemning the next generation to a pattern of begging and self-degradation? Is there no place for morality in this modern era? Somebody needs to take a stand and draw a line in the sand for change to happen. We cannot continue on this immoral path and expect to see meaningful or better change any time soon. We are literally and deliberately selling ourselves and our country to the devil, and feel no alarm for the consequences, all in the name of modernisation.

Is it any surprise that the young generation is practically lost and drowning in a sea of lust and perversion? Take a look at the dance and party advertisements we create, as well as some of the pictures we put on our calendars, especially those that depict some people’s favourite beverages. Most of these things are pornography plain and simple, but nobody is saying anything about them. We need to raise a hue and cry about these evils so that the police can begin arresting those responsible for creating and exposing them. We are truly doing a disservice to the next generation, but we continue to blame them for the damaging results.

Many of us who complain about the boldness of the youth, have not taken the time to ask ourselves why young people have become so bold in what is counter-productive. Could it be that you as an older woman have had a hand in pushing them down the very road that you so despise? Isn’t the previous generation responsible for teaching this one about the way to do life? Will you say that we have been faithful to our charge? Both men and women are guilty as charged here, and we all need to take stock. However, since our focus is International Women’s Day, I will continue to speak more directly to the ladies.

We have been raising children without introducing them to the boundaries of justice and moral uprightness, yet we expect them to find these on their own. Some children grow up without seeing any parent talking intimately to God. That is what true prayer is, and it has become a foreign concept in many homes, but these children see a multiplicity of men passing through their mothers’ bedrooms in quick succession. Sadly, there is no telling of the immense trauma such experiences generate, and how they damage the psyche of these unfortunate children. When there is no boundary, one can roam as far as one desires without fear of consequence, and that is what we have sold to our children. We give them no boundaries, but expect them to stay within bounds. What a paradox.

It is no secret that some mothers openly encourage their young men in criminal activity and enjoy the financial benefits that accrue in the short term. However, as soon as justice catches up with these criminals, as it has to at some point, you hear the mothers lamenting the untimely deaths of their favourite benefactors because the source of income has suddenly dried up. We have produced a generation of young thieves; and hard-working St. Lucians now live in fear for their lives and the safety of their possessions. Every business place in town is now forced to hire security personnel, and sometimes not even the presence of security cameras is enough to deter certain thieves. One well known businessman lamented on a news broadcast that in spite of paying his staff attractive salaries with benefits, theft among staff members kept rising at an alarming rate.

Mothers, it is time to wake up. Women, young and old, this is your hour to shine. Seize the boldness we know about; and begin to model lives of positive actions for our children to follow. Will you be that bold today? If you do, don’t be surprised if others follow you and initiate a revolution of bold and positive change all over our sweet, or should I say our once sweet Helen? Change is happening all the time, but what we want is bold positive change, and you can make it happen if you will take a stand today.