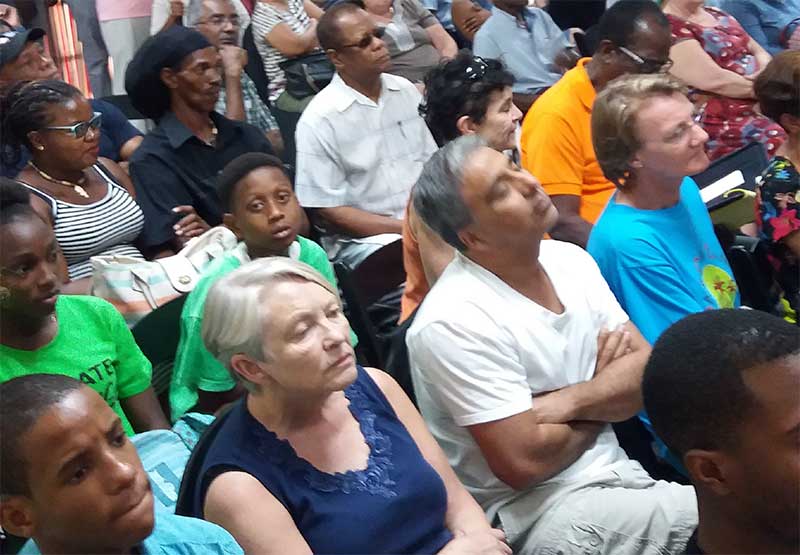 THE Saint Lucia National Trust (SLNT) says it will remain true to its mandate of protecting Saint Lucia’s natural resources and not be passive about any proposed development posing a threat to the conservation and sustainability of such resources.

Last Saturday, nearly 200 people – many of whom are members of the Trust – spoke out unequivocally against Dolphin Discovery Inc.’s (DDI) proposal to the government and SLNT to introduce a dolphinarium at Pigeon Island.

Three DDI officials were on hand at the Trust’s quarterly meeting held at Bay Gardens Hotel to pitch the project as a safe and economic benefit to the island. However, while they explained that job creation and leisure stood to benefit from the proposed park, they were greeted with stiff opposition from those who felt the island stood to lose immensely, including its green image.

One of the project’s partners, Ausbertd’Auvergne, a member of the Trust, said that a feasibility study for the dolphinarium had commenced in anticipation of getting detailed environmental impact assessments (EIAs). He said that while several sites were mulled in Saint Lucia, Pigeon Island, a national landmark, seemed the most appropriate.

“I looked at this project from the standpoint of a development proposal that was made and I looked at how a project like this could possibly impact on a location like Pigeon Island,” d’Auvergne told the audience. “The fact remains that Pigeon Island currently welcomes visitors; thousands of visitors are paying the Trust to enter the park right now. They come to the park because it is a natural attraction…Ultimately, the wishes of the people…will prevail.”

Former Trust Chairman, Sir Julian R. Hunte, said he has had “sleepless nights” and “difficulty” understanding why a dolphin park at the historical location was necessary. He said he was “encouraged” by the “vehement manner” in which opponents to the proposed dolphinarium had made their voices heard. However, he acknowledged that the uphill battle had just started and that the Trust must be given a strong, clear mandate.

“If we agree that something that is about to happen should not happen, then we must make our voices heard loud and clear,” Sir Julian said. “Maria Islands, with all its species of snakes and what have you, what is it (you want to do)? If you want to build a causeway, link Taiwan to China. If only for Robert Devaux’s name, whom we revere for the work that he has done as it relates to Saint Lucia and our patrimony, let us stand up for once.”

Director of SLNT, Bishnu Tulsie, told The VOICE that the meeting was held to apprise members about the proposed dolphin project and the DSH Phase II development, the latter for which a causeway was proposed to be constructed.

“We wanted to get feedback from members – their views on it – and what guidance they would give the Trust as an organization to move forward,” Tulsie said. “We had about 200 people at the meeting and the guidance we got was very clear. One is that there was opposition to the dolphin park, whether it’s at Pigeon Island or (anywhere else) in Saint Lucia. We were asked to advocate against it.”

Tulsie said there was also opposition to the proposed development in the south, which includes building a causeway connecting the mainland to the Maria Islands and that the Trust was asked to advocate against any such action.

Tulsie said that while many were welcoming of development, they were concerned about the way such proposals could have a negative impact on the island, including the potential to compromise the environmental assets and Saint Lucians feeling like spectators rather than being integrated in such development.

Tulsie said that while site clearing for the race track had already commenced, the terms of reference for the EIA (Environmental Impact Assessment) were only now being considered.

“We don’t understand how approval could have been granted for something for which the EIA has not yet been done. So these are some of the issues that we were asked by our members to explore and see if there were ways of engaging government and the developer in discussions on what is happening, how it’s happening, are they happening within the confines of the law and whether enough safeguards are being put in place to ensure that unnecessary damage is not done to our natural and cultural assets in the area,” Tulsie said.

The SLNT was established by statute in 1975 with the mandate to conserve the island’s natural and cultural heritage and promote values that lead to national pride. The non-profit organization receives a subvention from government to execute that mandate. By challenging the government on the latest proposed developments, Tulsie said members felt that the priority was to remain true to why the SLNT exists.

“If we are to pursue money at the expense of our mandate, then why are we getting the money? So it is clear to me from what the members are telling us that we have a job to do in the context of the law that created us. That is what we intend to do. We hope that the government is not going to see this as opposition to the government; that is absolutely not what we are doing. All we are trying to do is to ensure that as the development is put together, it is done in a way that is consistent with conservation principles.”

With Saint Lucia being a signatory to many international agreements that relate to the environment, Tulsie said that building a causeway would threaten the Ramsar designation of the area. While the need for employment in the south remains a concern, Tulsie said it was not what was being done, but rather how.

“It is not consistent with the principles of the Environmental Protection Area (EPA), which it was declared under the Physical Planning Act. So there are these kinds of conflicts in undoing what we have done in the past,” Tulsie said.

The Convention on Wetlands, also known as the Ramsar Convention, is an inter-governmental treaty that provides the framework for national action and international cooperation for the conservation and wise use of wetlands and their resources.

The convention entered into force in Saint Lucia on June 19, 2002 and the island has two sites designated as Wetlands of International Importance with a surface area of 85 hectares, namely Savannes Bay (25 hectares) and the Mankotè Mangrove (60 hectares).

Tulsie said members asked that they be engaged more in the discussions and that the Trust also engaged other like-minded organizations locally, regionally and internationally so as to steer any future development in a way that is compatible with sustainable development principles.

“We intend to take up that challenge that was given by our members and to reach out to our partners both within and outside of Saint Lucia to see if we can fashion a way forward which will meet our development objectives while ensuring the integrity of that which sells Saint Lucia – the natural beauty of the country,” Tulsie said.