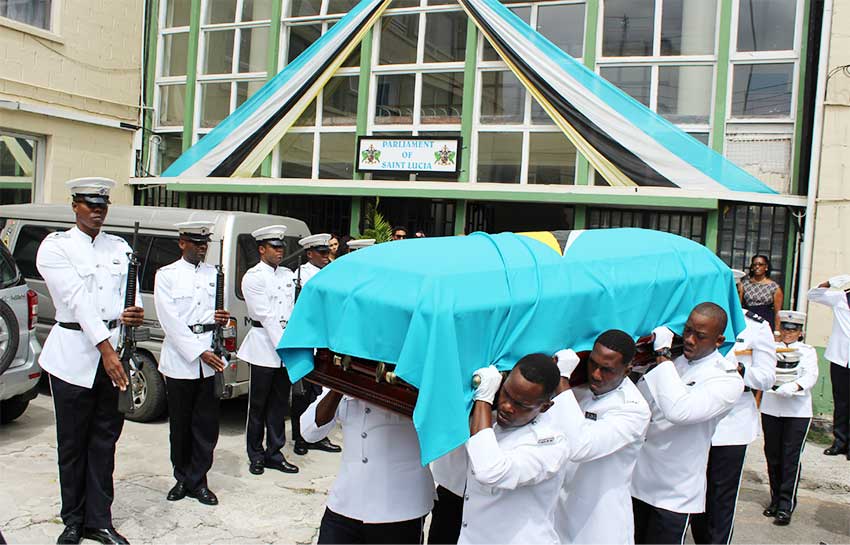 WORLD-RENOWNED poet/playwright, Sir Derek Walcott, was laid to rest near the Inniskilling Monument on Morne Fortune last Saturday afternoon, eight days after passing away peacefully at his Cap Estate home at age 87.

Mourners got a chance to see the famed poet’s casket as it lay in State in Parliament for two hours on Saturday and also sign the condolence book and offer words of encouragement to his partner, Sigrid Nama, children Peter, Elizabeth and Anna, and other family and relatives.

Later, the casket was carried by hearse to the Minor Basilica of the Immaculate Conception, with scores of onlookers lining either side of the streets to witness the historic moment, some capturing the scenes on their cellphones.

Monsignor Anthony said Sir Derek had made “our Caribbean voice immortal” and that, like great Caribbean heroes such as Toussaint L’Ouverture, Fidel Castro, Bob Marley, Usain Bolt and Daren Sammy, the late icon has given the region much to be proud about and that Sir Derek “has taught us how to be our best selves.”

“All those Caribbean icons who have made us great in the world – like (Sir) Arthur Lewis and (Sir V.S.) Naipaul – let us lift our heads high as a Caribbean people and say, ‘We can stand shoulder to shoulder with anyone in the world’.”

Poet Edward Baugh, who read the eulogy, was among scores of local and foreign dignitaries who turned out to say farewell to Sir Derek, who won the Nobel Prize for Literature in 1992 and is best remembered for his epic poem, “Omeros”.

Bahamian poet, Christian Campbell, told The VOICE that he first met Sir Derek 15 years ago when he was a graduate student, adding that Sir Derek changed his life as a poet and as a person.

“I wrote my dissertation on him,” Campbell said. “He’s a huge influence, so all of us are in some way children of Derek. I’m an honorary Looshan because of Derek. I first came to Saint Lucia in 2003 to interview Derek and I’ve been coming here frequently since 2011. Saint Lucia is a place where I feel like I have community as much as I do anywhere else in the world, in some case more than even in my own home countries, which is remarkable.”

Campbell reflected on his fondest memory of Sir Derek which, he said, occurred while he (Campbell) was teaching at University of Toronto and Sir Derek was invited to have a public conversation there in 2010.

Said Campbell: “We had some quiet moments just talking. It’s an incredible honour and privilege just to know him as a person.

There’s Walcott, the massive universe of poetry and then there’s Derek, who teases you mercilessly out of affection and is a connoisseur of terrible jokes. You just had to be a genius poet to tell those jokes and get laughs. He was full of love as well – he had incredible love and massive generosity. So I feel pure gratitude to have known him.”

“He asked me about reading Caribbean writers,” she told The VOICE. “I had never read any (because) I didn’t know Caribbean writers existed, except for him. So he said, ‘Here’s a list’, and he sent me a book of Caribbean writers…It didn’t occur to him that he was giving a young woman a book of fiction (whose) authors were all men. He just thought (it was) a good book.”

She added: “His advice was just always to work regardless of what people might say or what will be acceptable. It was not clear that a young woman from the Caribbean in New York – I really had no education, I had no money, I had no real social standing. Just writing these weird stories. There was no certainty that it would be accepted or last. But his very presence (changed that).”

On Sir Derek’s passing, Kincaid said she was still trying to grasp the poet’s final absence: “He is, first of all, always present and I have difficulty understanding this permanent absence. I wouldn’t see Derek for years, but the idea that I would see him didn’t really make me miss him because I will see him. But now this absence, with its permanence, is hard to understand, never mind accept.”

On his great body of work, she said: “He’s our Homer. He gives us the architecture of a myth in which to live our self. He makes the house our Olympus in which we enter and make ourselves again and again.”

President of American book publishing company, Farrar, Straus and Giroux Jonathan Galassi, said he was Sir Derek’s editor for nearly 30 years, starting with ‘Omeros’. He said it was “a wonderful thing” just being around the late poet, whose sense of humour shone through everything.

“Editing (his work) was just a few little suggestions. I would give my suggestions and them give it back to him and then it would come back. Either it would or wouldn’t be changed,” Galssi told The VOICE. “He was someone who showed his feelings indirectly. But we had a lot of fun down here visiting and I miss him greatly.”

Galassi said Sir Derek’s death was the end of a great era, saying that in the 80s and 90s, Sir Derek, Joseph Brodsky and Seamus Heaney were a triumvirate (a political regime dominated by three powerful individuals) that ruled the literary world.

“They were the dominant figures on our list and that connection among them, which was very close, was very significant. Derek is the last of that generation,” Galassi said.

When asked to describe his fondest memory of Sir Derek, he said: “Probably just being at his house and having breakfast with him, looking out over the ocean and hearing him gossip.”

Poet Vladimir Lucien said he became enamoured by Sir Derek’s work during his secondary school years while he was in the drama club and took part in almost every Walcott play staged there.

“I finally did his poetry at Sir Arthur Lewis Community College with Kendel (Hippolyte),” Lucien said. “That was where, I think, I decided to take a keen interest (in Walcott’s work) because it came at the crossroads of my own life and my own beginnings with seriously wanting to write poetry.”

Lucien said his relationship became closer in Sir Derek’s late years when he was “near enough to him to get a sense and spirit of the man.” Sir Derek, he said, was the real deal.

“You’re not going to get one story about Derek…But I think he was very honest. Derek’s love for Saint Lucia was evident in his industry. It was not an easy love. He was born in 1930 in a world which we’re still facing, where the country is seen as degraded and presented as something that is only good to leave. In battling with that, he produced a volume of work and that volume should tell you how much he wanted to be able to love his country without all of these encumbrances,” Lucien explained.

With Sir Derek’s brackets now closed, the world continues to pay tribute to a literary giant who spent most of his life telling the stories and poems that have left an indelible impression on people the world over. However, it has also sparked another round of debate to include his works on the Saint Lucia school curriculum.