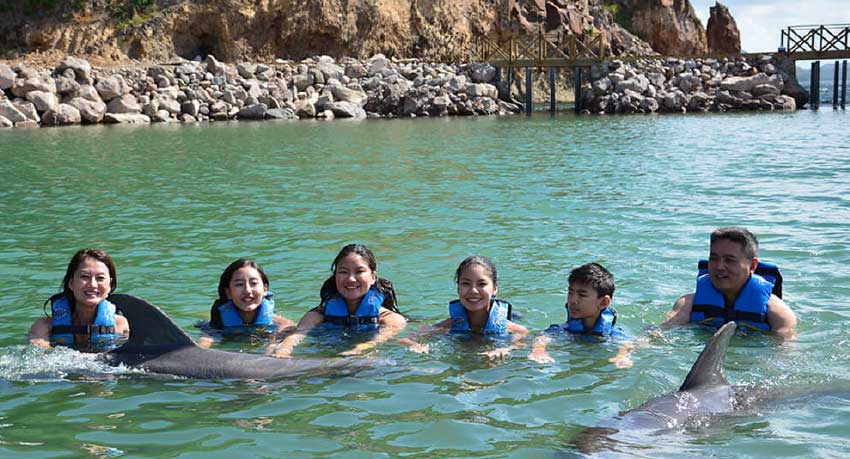 LOCAL airwaves and social media portals have been a-buzz over the last week with speculation about a proposal to establish a Dolphin attraction at Pigeon Island National Park.

THE VOICE has been reliably informed that a proposal to establish a Dolphin attraction at Pigeon Island National Park has indeed been presented to the Saint Lucia National Trust and to the Government of Saint Lucia. The Company involved is Dolphin Discovery Inc. (DDI), the leading operator of dolphin parks in the world (www.dolphindiscovery.com). The company currently operates twenty-one parks in Mexico, USA, Rome (Italy) and the Caribbean including parks in Tortola, Grand Cayman, Anguilla, St. Maarten, St. Kitts and four parks in Jamaica.

The Company has already met with the Executive Committee of the National Trust and is expected to meet with the full Council of the Trust as well as its general membership in the near future.

THE VOICE has been able to determine that this proposed facility would involve construction of an approximately 1.6-acre open water dolphinarium and a 1.35-acre land support, commercial, and recreational area.

The focal point of the project will be the open water dolphinarium with nine enclosed pools for the dolphins, including one large main pen and eight smaller holding pools. The dolphinarium will be accessed by a 180-foot pier, and the entire structure will extend outward from the shoreline approximately 340 feet.

At first, eight bottlenose dolphins will be kept in the open-water facility. However, it is expected that an active reproductive programme will increase those numbers to 15 over the next few years. All dolphins will spend the majority of their time (approximately 90 percent) together in the main pool. During programmes (30 minutes long), some dolphins may be kept in holding pools.

In the presentation made to the National Trust the Company has stated that a specialist veterinarian will be available 24-hours a day at Pigeon Island to care for the dolphins and that each dolphin will have a specifically-formulated individually-designed diet and feeding regime tailored to its age, weight and needs. The Company explained that after examining other potential sites in St. Lucia over more than a decade, its choice of this location is because Pigeon Island offers a sheltered bay, with excellent water quality that is ideally suited for dolphins.

The proposed location of the land facility at Pigeon Island is behind and outside the boundaries of both Josset’s House and the Old Military Cemetery. The land facility would therefore not encroach on either of these historic attractions. The existing Jambe du Bois Restaurant and the private beaches inside the National Park would not be affected or displaced.

Contrary to what has been stated in some comments aired over local media channels, the proposed location is inside the walls of Pigeon Island and will not in any way affect or reduce the use by the public of the Pigeon Island Causeway beach facilities.

In its discussions with the Executive Committee of the National Trust, Dolphin Discovery pointed to its successful operation for more than twenty years of a dolphin facility similar to the one proposed for Pigeon Island, within a National Park in Cozumel, Mexico.

In a letter that has been circulated to members of the Council, Dolphin Discovery submitted a specific proposal for a business relationship with the Saint Lucia National Trust. That proposal includes: the payment by DDI of a monthly lease rental starting at US$5,000; the construction and maintenance by DDI of a visitor shelter at the entrance of the National Park; the upgrading and maintenance of the roadway to the proposed location of the dolphin facility; the use by DDI of only electric shuttle vehicles within the National Park; the payment by DDI to the National Trust of US$5.25 (based on the current entry fee to Pigeon Island National Park) for each adult visitor to the dolphin attraction with a projection that 200,000 visitors will be attracted over the first five years of operations.

The Company has stated that in keeping with its practice born of experience at its facility at the National Park in Cozumel, Mexico, careful attention will be paid to ensuring that the architecture of the land-side structures is totally consistent with the architectural tradition of the Pigeon Island National Landmark and will utilize timber and stone, with the marine structures being built with treated timber and the plant species used for landscaping being compatible with those existing at Pigeon Island with the addition of compatible colourful floral species. It has further stated that low-impact construction methods will be used with state-of-the-art and environment-friendly technologies being adopted for sewage and waste disposal.

DDI has advised that the number of persons to be employed during the construction period is 100 – 120 workers over an estimated construction period of 6-8 months. The number of direct permanent jobs to be created at the dolphin facility is 32 with 70% being St. Lucians from the outset with this percentage increasing to 90% within 5 years. The current percentage of local employment at the Company’s dolphin facilities in Jamaica is 95%. In addition, the project is expected to have a significant indirect employment effect. Those benefitting will include service providers, tour operators, tour guides, taxi drivers, coach drivers and concessionaires.

Pigeon Island National Park is currently open to visitors and welcomes thousands of paying visitors throughout the year who visit its existing attractions. Revenue from fees paid by these visitors is the main source of revenue for the National Trust that receives an annual subvention from Government. Each Year, Pigeon Island National Park hosts thousands of music lovers, St. Lucians and overseas visitors alike, who converge on the Park for the annual Jazz festival. Other revenue streams for the Trust include fees from concessions such as the Jambe du Bois Restaurant, beach chair rentals and scuba dive operators.

Before the proposed development is able to proceed, planning approval must be granted by the Development Control Authority that will give careful consideration to the findings of an Environmental Impact Assessment.