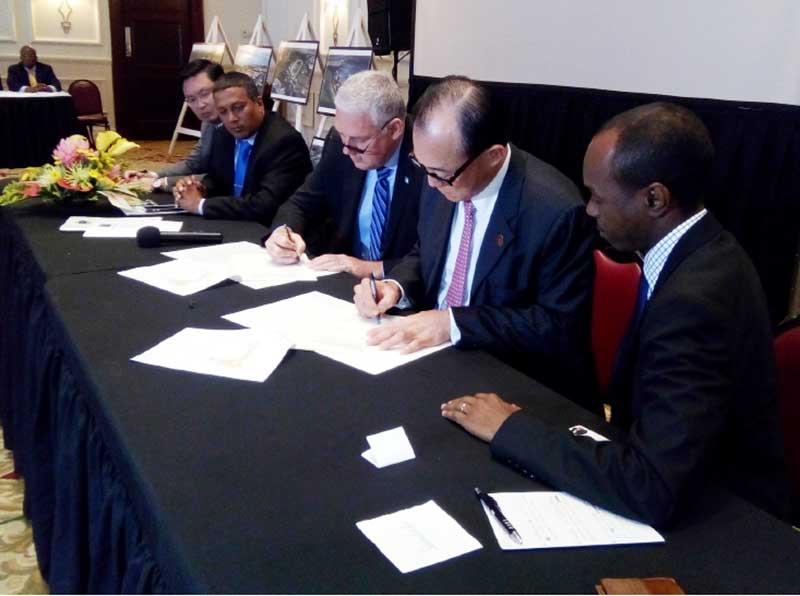 ANOTHER stage of the proposed multi billion dollar Pearl of the Caribbean project at Vieux Fort was launched on Thursday and it immediately began stirring concern.

The project has already produced a number of opponents as well as supporters. Construction of the first phase, a race track, has already started and now the investors are hinting at the possibility of linking the mainland to Maria Island by a causeway similar to what was done between Gros Islet and Pigeon Island decades ago.

The St Lucia National Trust says it finds the proposal disturbing, according to an email circulating amongst members hours after Prime Minister Allen Chastanet and Teo Ah Khing, Chairman ofDesert Star Holdings (DSH) signed an agreement for the causeway concept.

Said the email in part: “The disturbing news is that in addition to destroying the ecological, environmental, historical, archaeological and social assets enshrined in Pointe Sable, the DSH plan includes a proposal to connect Maria Major and Maria Minor and building a causeway to the main land.

“The Trust has been trying feverishly to obtain official project documents from the relevant authorities but to no avail. This proposed plan threatens Maria Islands, a Nature Reserve, which is the home of the world’s rarest snake, the Saint Lucia Racer as well as the Saint Lucia whiptail and many other unique flora and fauna.”

But Khingsaid Thursday that neither the ecological, environmental, historical and archaeological elements of the islands will be disturbed, if the causeway idea is pursued.

“We are going to preserve, enhance and do detail research on all the existing wildlife and marine life on these islands,” DSH CEO said, speaking to business executives, government ministers, media personnel and others at the launch of phase two of the project at the Sandals Grande.

He explained that the concept will be to allow locals and tourists to experience the rare natural features of the islands in a manner that will not interfere with its wildlife and marine life.

But according to the Trusty’s email the organization aims “to do all in its power to ensure that these priceless and fragile assets are protected for the benefit of every Saint Lucian and the future generations.”

“We call on all Saint Lucians who genuinely care about our heritage to support us in our conservation work and to ensure that Maria Islands and the Pointe Sable Environmental Protection Area (PSEPA) are not destroyed,” noted the email.

BishnuTulsie, the Trust’s director said he could not believe his ears on hearing that Maria Islands were roped in the DSH Pearl of the Caribbean project.

“I was shocked,” Tulsi said in a brief interview with this newspaper.

But this stage of the project also has its supporters, one of whom is Economic Development Minister Guy Joseph who described the initiative as a bold move which will differentiate St. Lucia from its competitors.

Joseph believes St. Lucia needs to make some bold moves if it wants to differentiate itself from its competitors.

“I believe that this project is one of the boldest moves that any government can take in this region or any part of the world at this point in time. Now, this may be very challenging to some people on the basis that we are not used to that scale of development in these small islands, but should we not dream big, should we not aspire to be the best? I believe that this project is going to truly differentiate St. Lucia from the rest of its neighbours and competitors, especially in this region and this part of the world,” Joseph said.

Noting that anything could happen to prevent a project from going through, Joseph said that the risks involved are calculated not careless ones.

“Does that mean that as a country we should not take the initiative because of the risk associated? What is it that we have attempted to do that risk is not associated with?” Joseph said.

He added that St. Lucia cannot continue with the normal way of doing things especially now that it is on an unsustainable path.

“We know we have challenges, that there are things we must do as a country. I see the DSH project as playing a major role, a catalyst to drive the development of the tourism sector and all of the others that are going to happen around it. This project is going to make a marked difference in St. Lucia, not just for the south,” Joseph said.

The Economic Development Minister calls on St. Lucians not to limit their vision and their need for growth as this is important for the overall development of the country.

The Trust, meanwhile, will be holding a membership meeting today at the Bougainvillea Conference Room, Bay Gardens Hotel where phase two of the project will be discussed.

It is envisaged that the Trust will also hold a membership meeting within the next couple of weeks in Vieux Fort to discuss the implications of the phase two of the DSH plan and their impact on Saint Lucia’s patrimony.

Khing in an exclusive with The VOICE said the Maria Islands inclusion in the project is just a concept at the moment and was included because of the project’s potential, its vision and the opportunities it presented.

“This piece today is a potential piece subject to a lot of studies. It is just a concept right now. The shape, the size, everything can vary based on detailed studies,” he said.

The southern causeway proposal would involve some 150 – 200 acres of reclaimed land in addition to the current land available, portions of which will be returned to the people of St. Lucia, according to Khing.

He believes that with the proximity of the Hewanorra Airport, the Pearl of the Caribbean project with the causeway included connecting the Maria islands nature reserve will be a world class enterprise which will catapult St. Lucia into a premier destination, with the hope that it will attract international investors and financiers to St. Lucia.