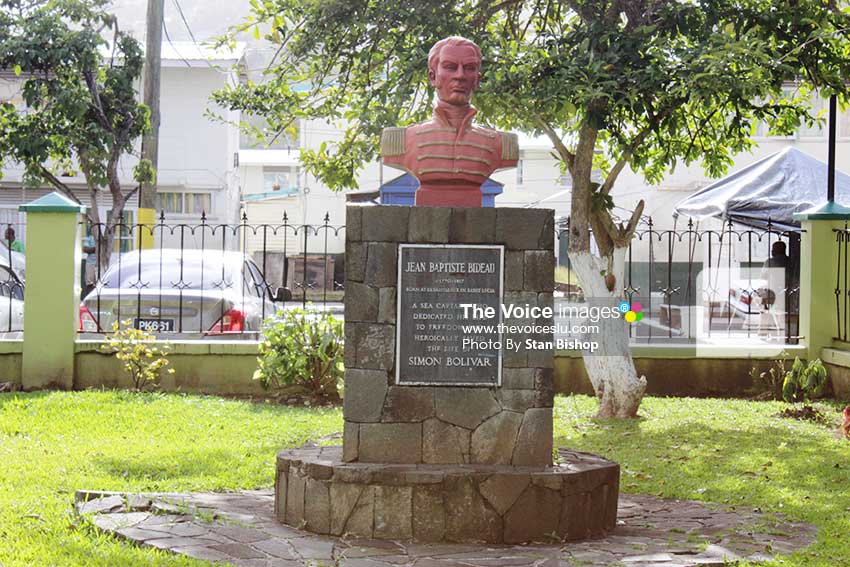 PREPARATIONS are underway to commemorate the 200th anniversary of the death of Saint Lucian hero, Jean Baptiste Bideau, who played a crucial role in Venezuela’s Independence.

Among his many accolades, Bideau is credited with saving Venezuela’s liberator, Simon Bolivar’s life on the beaches of Ocumare de la Costa in Venezuela on July 14, 1816. Two busts of both men are featured in a small park in Saint Lucia between the National Printing Corporation and Parliament building called Place Bideau.

Venezuela’s Ambassador to Saint Lucia, LeiffEscalona, told The VOICE that the activities will run from April 4 to 7 in Saint Lucia and Venezuela as part of “Bideau Week”.

Activities leading up to the grand affair in April include the Bideau book train held last week involving Escalona visiting primary and secondary schools in Castries to present them with copies of a book based on Bideau, for which a book competition about his life will follow with prizes up for grabs.

During “Bideau Week”, a different historical film about Venezuela will be screened each day at various venues, including Constitution Park. Prior to that, the embassy plans to visit Desruisseaux, Micoud, Bideau’s birthplace, to present books to schoolchildren and screen films.

Escalona said Bideau’s spirit represented the bridge between both countries, adding that heroes from other Caribbean countries participated in Venezuela’s Independence struggle alongside Bolivar. The idea, she said, is to recognize Bideau’s participation and the unity that exists within the region.

“Venezuela’s ties with Saint Lucia go as far back as 1979 when Saint Lucia gained Independence on February 22. On September 14 that year, we established our first diplomatic relations here. In January, 1980, we opened our embassy here,” Escalona said.

Escalona, who is also Dean of the diplomatic corps, led an expedition to Gros Piton Nature trail on March 4 in which twenty-six people, including herself and three other ambassadors — Argentine, Cuban and French — participated.

However, officials representing Spain, Mexico, Chile and Austria also participated with eighteen people completing the grueling hike to the top of the mountain, including Minister with responsibility for External Affairs, Sarah Flood-Beaubrun.

“As Dean of the diplomatic corps, we sometimes organize different activities around the time of Saint Lucia’s anniversary of Independence,” Escalona said. “We usually decide to visit a great place in Saint Lucia; this year, we decided to climb Gros Piton, which seemed a good idea to a lot of the ambassadors, honorary counsels and the Ministry of External Affairs to whom I sent invitations.”

Escalona has climbed Gros Piton three times, her first expedition being in 2013 when she was posted here and she said plans will be made to climb Mt. Gimie, Saint Lucia’s highest elevation, soon.

“It was a really good experience because it demonstrated solidarity, integration and the good relationship shared among the very active diplomatic corps. Sometimes we plan activities together while other activities are planned among selected embassies. Nevertheless, we always support any activity planned by any aspect of the diplomatic corps.”