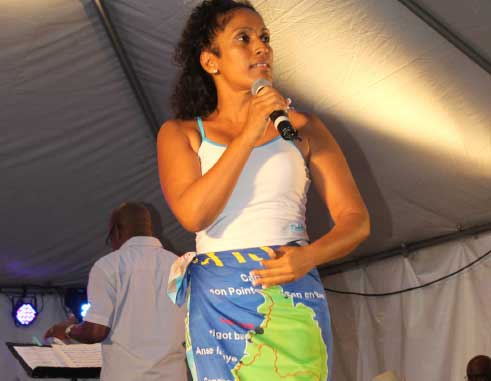 GETTING an early start to play any role in life is always a plus. However, maintaining the momentum to wade through the challenges and become increasingly successful at it is no easy feat.

Francene Beharry knows the script well enough to admit that achieving anything great does not comes easy. For most of her life, the fruits of her hard labour have seen her go through – and step onto – stages beyond her wildest dreams.

Earlier this year, Beharry formed part of a star-studded cast in “Twisters”, a play written and directed by Forde, in which she plays Joan, the live-in girlfriend of Bluff, who has his heart set on a younger love interest. That character, she said, has since resulted in appreciative fans referring to her as Joan.

“She’s very unhappy in that common law situation; she craves more attention and love from her man,” Beharry tells me. “Initially, she explains to him (Bluff) situations where he was the one letting the relationship fall apart and later gets to the point where she begins to detach herself from him and seek love elsewhere.”

As the play unfolds, Joan began flirting with village barber, Stan (played by Christopher “Der Zol” Duncan), who is well-versed in the storied wild life of Joan’s boyfriend. Capitalizing on her good looks and charm, she entices Stan in his barbershop, close enough to make his imaginations run wild like his mouth.

“Twisters” was Beharry’s third major appearance in a play, her first being Gandolph St. Clair’s play, “Just In Case”, in 2005. She said the experience was different from her theatrical days at primary school because she realized the tremendous amount of detail that went into creating a character.

“I observed the other actors so much and fed off of their knowledge, skills, talents and ideas. We didn’t have enough time to go into workshop training; however, I took the little tips to heart and did my best. We also had a dramatist, GyanchandRayman, who observed my work and gave me some guidance, which helped to build my knowledge of theatre,” she explained.

“I got a lot of good reviews and started to hear people say that they were pleased with my work,” she said. “I mean, I felt comfortable on stage, so for them to feel how comfortable I was made me feel good about it.”

Born in Entrepot, Castries to Guatemalan mother, Estella, and Saint Lucian father, Peter, Beharry attended Canon Laurie Anglican Primary where she had her first experience in theatre at age six in the school’s Christmas show. After the girl who was billed to play Mary’s character in the Nativity scene dropped out, Beharry seemed the next best option.

“I always felt that the girl was not pronouncing the words properly, so that got me interested in wanting to be in something like that,” she explained. “When I eventually got the part, I went at it as hard as I could and my Mom helped me.”

After the play ended, the teachers were so pleased with her performance that they gave her the doll that was used in place of baby Jesus as a present. However, she said that initial foray onto the stage remains a treasured memory because she was happy that her mother – who died from cancer the following year – had gotten the chance to see her on stage doing something good. Things fell apart afterwards.

“I stopped acting for a while and concentrated on my schoolwork. At the time, I felt pressured because some people placed a negative link to it which dampened my spirits. It was very disheartening. However, as time went by, I decided it was time to return to the things I loved,” she said.

Beharry later attended Leon Hess Comprehensive Secondary School. While there, she had the opportunity to visit Venezuela with fellow classmates and learned to speak Spanish. She described the trip as an eye-opener because she was able to see cultural performances in the streets being embraced by the people. That motivated her even more to want to act.

Beharry admitted that growing up without a mother left her unsure and lacking confidence. She wanted to know what it meant to be a woman. Moreover, she questioned whether she would be a good mother.

She attended Teachers’ Training College from 1996 to 1998 and picked up other artistic talents along the way, including drumming, poetry and singing, receiving vocal training from two-time Calypso Monarch, Jason “Bachelor” Joseph, as part of the St. Lucia School of Music’s Community Choir. Performing in the choir, she said, made her realize that there were more dimensions to her than she knew previously.

“I preferred to sing alto; however, I was able to go down to a male bass voice which, he said, was very interesting. I have always loved jazz, so that gave me the confidence that I could go into jazz music. So the vocal training opened another thought in my mind by giving me more scope about my abilities,” Beharry said.

Now mother to two boys, Beharry has been a school teacher for the past 26 years and taught children from kindergarten to secondary levels. She has taught Theatre Arts at St. Aloysius R.C. Boys’ Primary School for the past two years, each class getting one session per week. She has also taught dance for many years and is instrumental in ensuring the masquerade tradition continues.

Her talents also extend to the annual R.C. Jam hosted by the school during the carnival season where she helps to prepare the boys for the calypso and soca competitions. Last year, she wrote six of the songs for the competition, with one winning the calypso monarch and another second runner-up in that category. Her aim is to write eight songs for this year’s competition.

In 2015, Beharry represented the St. Lucia Teachers’ Credit Cooperative at the Inter-Commercial House Calypso Competition with a song she collaborated on with Gilroy “Ezi” Hall and arranged by Cornelius Simon. While she did not place in the competition, she said it was rewarding enough to sing her own song and receive positive feedback from the audience.

With the bug to step onto the stage and captivate audiences with her charm not letting up, Beharry craves the opportunity to be in more plays. In fact, she is trying to attend school overseas to study theatre arts so as to fine-tune the craft that gave her the confidence she previously lacked but now exudes effortlessly.

“The arts have helped me a lot and the things that I’m good at are all intertwined with theatre,” she said. “I think theatre arts give us the freedom to express our views, build confidence and knock out some of the negativity that’s going on around us that some people are scared to talk about.”