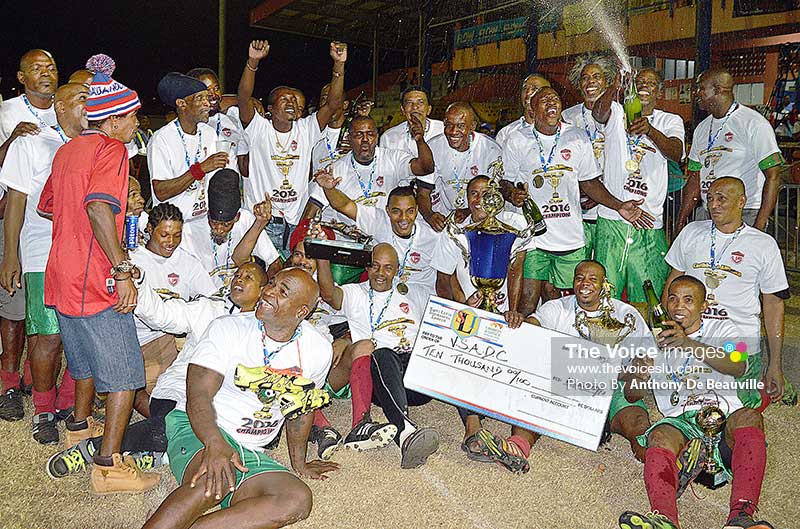 VSADC emerged champions of the 2016/2017 Veterans In Sports Inc./Caribbean Alliance Cup on Saturday evening at the Phillip Marcellin Grounds before a capacity with a 1-0 win over Central Vieux Fort.

The atmosphere was electrifying as predicted, but disappointing in the end for the Vieux Fort supporters, who rode high on their four championships winning streak.

In the first four minutes of play, Central Vieux Fort was robbed of a goal when Emerson Jn. Marie’s powerful strike from 35 yards out hit the cross bar. There were a few half chances on either side, but going into halftime, the score line remained goalless.

The crowd had grown tremendously by the resumption and only standing room was available as supporters from both sides kept the momentum going with the loud shouts and horns blowing. VSADC broke the deadlock via the penalty spot in the 79th minute after striker Barnett Bledman was fouled in the penalty area by CVF player Curtis Benoit.

The experienced Sean Kirton stepped up to the spot for the penalty and with a low right foot shot to Andy Jn. Baptiste’s and that left was all VSADC needed for victory.

With one goal up, VSADC continued adding the pressure, but CVF defended astutely, knowing that another goal in the dying minutes would further demoralize them.

CFV kept their game up by creating three scoring opportunities, but VSADC’s Stanley Lesporis, who was injured in the 68th minute, came up with three timely saves for his team.

For the third place silverware, former champions Soufriere defeated Micoud 2-1, with goals from Marius Joseph in the 7th minute and captain Jerome Serville in the 87th minute. Conrad Evans pulled one back for Micoud in the 57th minute.

For their efforts, Soufriere received $3000 and a trophy and bronze medals, while Micoud collected $2000.

Veterans In Sports Inc. CEO, Alvin Malaykhan said: later “I am extremely happy with the outcome of the tournament. The quality of play was exceptional and so, too, was the crowd support. Hats off to both teams for a wonderful display of football. This event can only grow with the support from the fans and I must say thank you for coming to support the veteran players in your numbers.”

Malaykhan promised an even bigger and better tournament in November.