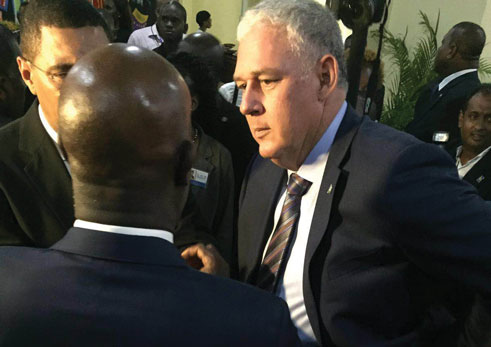 “It is great to be here today,” Prime Minister Chastanet said at the opening. “I am pleased that the civil servants particularly in the department of Finance and Economic Development are going to get a beautiful building. I am encouraged to think that being in a better place will enable them to be more productive, and that anybody who is in this building is going to recognize the sacrifice that everybody else continues to make on their behalf on being here.”

The Prime Minister also applauded those who played a part in the establishment of the facility.

“I want to congratulate everybody who participated in this development. I want to say to the Director of Finance that I am looking forward to some savings and great improvement in productivity because it is extremely important to me that every civil servant has access to a comfortable working space.”

He later unveiled the centre’s plaque, while Dame Pearlette carried out the ceremonial cutting of the ribbon.