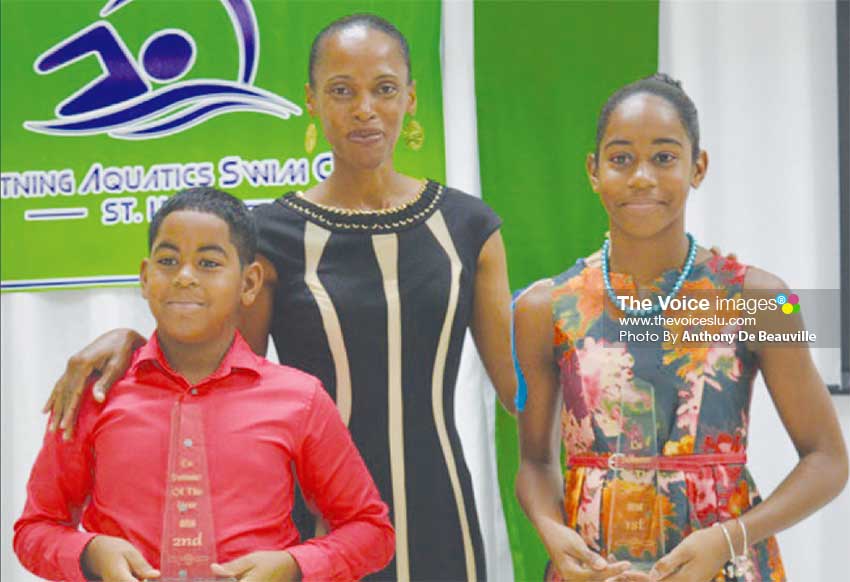 IT was a celebration with a difference and for the second consecutive year the organizers of the Lightning Aquatic Swim Club on Sunday presented awards to young swimmers under the theme, “Aiming for the stars with every stroke”.

President of the Saint Lucia Amateur Swimming Association, Carl Mangal, said the year 2016 marked a turning point when Lightning Aquatics reinvented itself after some of its founding members migrated to other clubs and the original coach severed his ties. “The old adage “every disappointment is a blessing “ certainly rang true when Lightning Aquatics was blessed with not just one but with four coaches – two of whom were former swimmers who returned at the drop of a hat to offer their services,” she said.

Mangal said, “it was against this backdrop that Lightning Aquatics must now prepare itself for the future and make full use of those blessing because “to whom much is given much is expected”.

Tessa Louis President of Lightning Aquatic said the club participated in all local meets held in 2016 and although their best result was third overall, they continued to amass medals, ribbons and high point age group trophies. Regionally the club participated in the Barbados Amateur Swimming Association Invitational where they placed 7th out of 15 teams and 3rd in the OECS and the Amateur Association of Trinidad Invitational where the swimmers did exceptionally well.

She said: “On a National team level six of our swimmers qualified for the Saint Lucia team participating at the Goodwill games, a number of medals were won and our very own Naima Hazell broke two records in the 50 metres breaststroke and 100 metres breaststroke. For the OECS championships held in Saint Vincent and the Grenadines four LA swimmers made the national team. We came home with 6 gold, 1 silver and 3 bronze and saw 5 records set.”

Guest Speaker and former national athlete, Curriculum Specialist / Physical Education / CAMDU Unit; Ministry of Education VernettaLesporis said, the theme “Aiming for the stars with every stroke”. was very appropriate as sometimes we aim too low and sell our selves short or we don’t aim at all. While it is great to aim for the stars we need to ask ourselves what are some concrete actions we can take to reach those stars.”