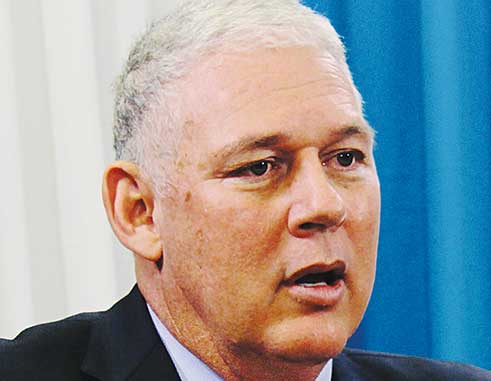 The Washington-based International Monetary Fund (IMF) which carried out its latest Article IV consultation here last month, announced that despite weak tourism activity, unemployment continued to fall in 2016 and that the St. Lucia economy is expected to experience positive, albeit, moderate growth in 2017.

The IMF said the Chastanet government was designing “a bold programme of economic reforms” which it intends to outline in the forthcoming budget.
The IMF said that a credible medium-term fiscal consolidation plan and a rapid implementation of the reform agenda are needed to reduce policy uncertainty and ensure the success of the authorities’ economic programme.

“Weakness in tourism activity continues to dampen growth. Strong employment growth in agriculture and construction led to a significant reduction in unemployment in the first three quarters of 2016.

“Nonetheless, weak activity in tourism, transport, and manufacturing hampered GDP (gross domestic product) growth, which is estimated to have reached 0.8 per cent in 2016. Declining exports are widening the current account deficit after improvements in recent years mainly owing to lower oil prices,” the IMF said.

The IMF said that the short-term outlook is mildly positive, but presents some risks.

“Moderate growth is expected in 2017, primarily on account of continued strong performance in construction and agriculture. The overall outlook appears uncertain as positive developments in tourism –the expected increase in the number of hotel rooms and the opening of new direct flights from the United States –may be stifled by the impact of the new airport tax.”

The IMF said the Allen Chastanet administration is launching “an ambitious programme of economic reforms, but key policies are still being shaped ahead of the forthcoming budget.

It said the broad pro-growth reform agenda is focused on lowering the tax burden, enhancing the efficiency of the tax system, and reducing tax compliance costs; reorganizing the public sector to rationalize functions and increase efficiencies; reviewing the Citizenship by Investment Programme (CIP) to make it more competitive; and enacting structural reforms to improve the business climate and encourage foreign direct investment.

“This programme addresses many areas that are critical to strengthening St. Lucia’s growth potential, but details of the policies are still pending and many of the reforms will take time to yield results. In the meantime, the fiscal package announced by the government under the “Five to Stay Alive” initiative, which includes a reduction of the VAT rate from 15 per cent to 12.5 percent, will weaken the fiscal position unless measures are taken to mitigate its impact; and, by shifting the tax burden onto the tourism sector, risks having undesirable effects on competitiveness and growth.”

The IMF said that a multi-year fiscal consolidation plan is necessary to stabilize the projected debt dynamics and attain the 2030 debt target of 60 per cent of GDP.

It said the high public debt, currently exceeding 82 percent of GDP, and a delicate fiscal situation need to be addressed promptly.

“A fiscal consolidation plan would help the authorities clarify their intentions, confirm their commitment to fiscal responsibility, and reduce risks while the economic program is being defined. By mapping the path to the debt target, the authorities would minimize the risk of sudden corrections, which typically involve cuts to capital projects, thereby gaining control over expenditure composition while improving its quality. “The plan should be adopted as soon as possible and measures should be included in the financial year 2017/18 budget currently being prepared.”

The IMF said the adjustment effort should focus on broadening the tax base, controlling expenditure, and improving financing terms.

“Further cuts in tax rates should be preceded by a reduction of the extensive exemptions that undermine the efficiency of the tax system. Consideration should also be given to reducing the very high taxes and charges on imports, which are particularly harmful to external competitiveness.”

It said that in view of the importance of the public sector wage bill, continued control of wage dynamics and intensified attrition in the context of a functional assessment of employment needs are key.

“Social spending should be preserved and gradually refocused from temporary work programs and non-targeted subsidies to targeted social assistance. Much needed investment in infrastructure, renewable energy, and natural disaster resilience should be financed with concessional lending rather than costly bond issuance, and partnerships with the private sector should be used when feasible.”

The IMF said the consolidation plan should address the need to prepare for the inevitable recurrence of natural disasters.

St. Lucia, like other countries in the region, is extremely vulnerable to natural disasters, which entails significant costs in terms of lower investment, lower GDP, higher poverty, and a more volatile revenue base.

The IMF said that costs can be significantly reduced by preparing for these events with adequate domestic policies aimed at increasing resilience and reducing risks.

“These policies should be integrated into investment, debt, and public financial management frameworks. Financing should be arranged ahead of time through a combination of fiscal buffers, contingent financing plans, and risk transfer arrangements.”

The IMF said that funds derived from the CIP should be used primarily to reduce debt, and limits should be placed on amounts used to finance high-priority expenditure.

“After receiving relatively few applications in 2016, the authorities expect that the recent easing in the requirements and lowering of the costs to qualify for this programme will encourage an increase in revenues.

“To minimize the risks of fiscal dependence on these revenues, which can be volatile and subject to sudden stops, and to reduce the impact of globally rising interest rates on public finances, priority should be given to amortizing existing debt.”

The IMF said that a capped amount could be used for investment projects of primary importance if public investment management can be strengthened further to ensure high quality investment.