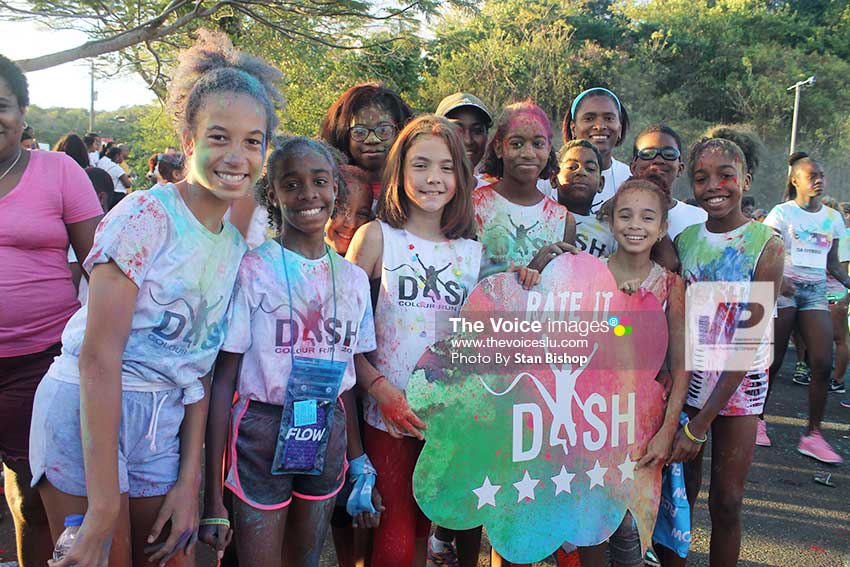 NEARLY 1,200 participants took to the road on Sunday morning for the third annual Independence DASH Colour Run that began at Massy Stores Mega and ended near Baywalk Shopping Mall.

The event certainly was colourful and there was no shortage of coloured powder, smiles and laughter and special prizes awarded at the finish line.

One of the organizers, Solange Stanislas, told The VOICE that packages were sold out for the event that attracted a predominantly young crowd. While the event is open to all ages, she said it was pleasing to see young people respond to such an event as positively as they did.

Proceeds from the event go to the Child Development & Guidance Centre (CDGC), which functions as the only multi-disciplinary developmental assessment centre in Saint Lucia. To date, over 50 volunteer therapists have provided thousands of hours of therapy to some of the over 1,000 children who have been assessed at the centre and hundreds more in the school system.

“It is a charity that’s very close to us as it literally embodies what we’re about – providing a fun, loving and nurturing environment for young people,” Stanislas said.

Sunday’s event was the biggest so far and Solange expected it to grow as DASHers tell their friends about it and people recognize the need for spending fun time with family and friends and making friends along the way.

“We encourage young people to participate in events like this,” Stanislas said. “The police were around but there was not one incident of violence or instigation or anything like that, which is actually what we know young people could be capable of being, (that is) being violent-free.”