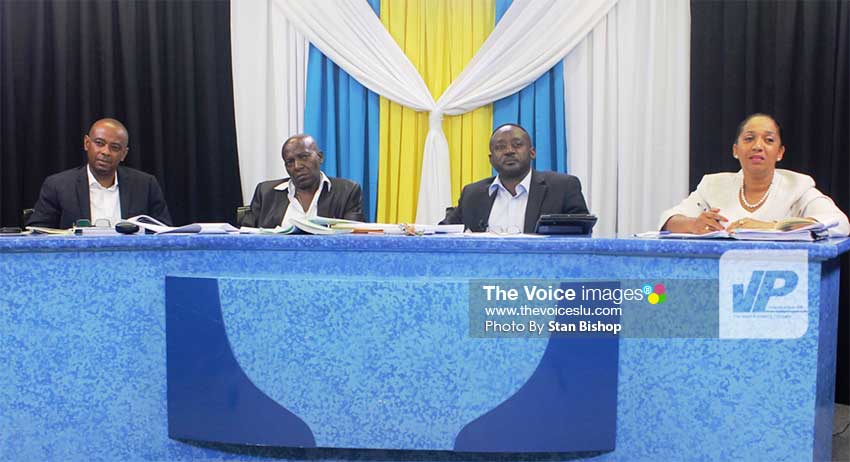 THE second part of the “Discourse” series on the topic, “Fundamental Rights and Freedoms”, was held last week with freedom of assembly and association and protection from discrimination coming under the microscope of the four-member panel.

Section 11 (2c) of the Constitution speaks to the protection of freedom of assembly and association and Richelieu said that while public servants should be given copies of the Staff Orders, many of them have no knowledge its contents “until a particular circumstance arises”.

George said it all redounded to whether the Staff Orders have the force of law, adding that the court seemed to treat it as if it were in many of the related matters he had dealt with. Citing Section 11 (2c) of the Constitution, he posed the question: “If they are allowed to continue employment and seek political office, can you say that they can reasonably carry out the proper performance of their functions?”

“At the end of the day, inasmuch as there is a balance that must be struck between whether the constitutional rights are being infringed, the question really is can they maintain their constitutional rights and retain some measure of independence in performing their functions as public officers?” George said.

George said that while the courts had not made any declaration on the matter, he believed it was good practice for public officers to not show their political colours openly, especially in small societies. He also agreed with Richelieu that in most instances the Staff Orders are not brought to the attention of public servants at the time of their appointment.

“It’s a requirement (that) if you’re going to contract out of your right, you should be aware of the existence of what you’re contracted (to),” he said.

Richelieu argued that the provision should not be used for all levels of civil servants since those lower down the hierarchal chain might not be privy to confidential information as would those higher up.

However, Fraser said that since the Staff Orders was a policy document, and due to the propensity for policy often clashing with constitutional rights, “it need not be elevated to the level of a law”.

On the issue of protection from discrimination, George, who served as a Commissioner on the Constitutional Reform Commission (CRC), said that while the Commission heard many presentations on sexual orientation and its meaning, most presenters determined that the definition of ‘sex’ in the Constitution was not broad enough. However, he said the Commissioners felt otherwise and did not recommend an extension of that provision.

“But, of course, it is important to say that the Commission spoke as a Commission but there were individual Commissioners who had their personal views on the matter and felt there should have been an expansion and elucidation of the specific items classifying Section 13. (They) felt that ‘sexual orientation’ was not the same as ‘sex’,” George explained.

Discrimination against women was another hotly-debated topic, with George noting that the Commission determined that current legislation should incorporate the international conventions Saint Lucia is party to. He cited the Convention on the Elimination of All Forms of Discrimination against Women (CEDAW) adopted in 1979 which Saint Lucia, having signed onto, has since not included in domestic legislation. Failure to ratify these international conventions, he said, redounds to them having no force of law in Saint Lucia.

“Similarly, the Universal Declaration on Children’s Rights (in which) a number of the sections in that particular charter give rights to children that we have not observed in our local legislation because we have not ratified the legislation,” George explained.

George added: “That is why we need amendment to the Constitution. It makes a good case because the judiciary is reading the Constitution in a restricted manner. I think the time has come for the provisions to be expanded.”

Despite the CEDAW convention coming into force in 1979, Richelieu said he was taken aback that in 1986 the local court found that an unmarried pregnant teacher had to be dismissed from the teaching service.

“They said that as far as they were concerned, sufficient evidence had not been led in order to rebut the presumption of constitutionality,” Richelieu said.

With all these inconsistencies in the law unnerving many Saint Lucians, St. Rose believes that citizens need a Constitution that “can be stretched to encompass anything that can reasonably come up” in the ever-changing society. However, she disagreed that the Constitution should be changed regularly due to the time and efforts that go into the process.

“Drafting legislation is a very tedious and longwinded process,” she said. “While some of these laws are not enforced and then you can get rid of them, I suppose people need not worry unduly that they would be caught by any of these laws because nobody’s going out looking for these people committing buggery and whatever.”

George agreed: “It’s obvious that some of the laws need to be amended but because of the effort that it takes in drafting, the expense, the time, you cannot just shelve laws and replace (them) with laws. It’s a tremendously exhausting exercise….It takes time to develop those laws and make amendments. Although, suffice it to say, that when Parliament seems to want to push laws through, they do that in rather quick time.”

George said that with more young people getting into the political and public sector, there will be dynamic change, so much so that “we wouldn’t be able to contain it because our young people go out there and get exposed and see things differently. I have no doubt it will change and will (do so) faster than we can manage.”

When the CRC’s Report was debated in Parliament in August 2015, parliamentarians shot down many of the 190 recommendations made by the Commission chaired by former judge, Suzie d’Auvergne. One of the contentious issues arising from that debate was that elected members resign from the Chamber should they decide to take up ministerial posts. Richelieu said the people’s voices need to result in the changes they called for.

“To my mind, if persons are dissatisfied, I do not understand why if there is an effort in terms of making recommendations for the review of the constitutional provisions to make it as dynamic as possible in order to meet the needs of our current society, that it would be picked up and thrown in a dustbin,” he said. “Something is wrong somewhere. Does it mean that we still want to remain in our old colonial age?”

For the Constitution to be changed, it must first get a special majority vote in Parliament before being put to a referendum.