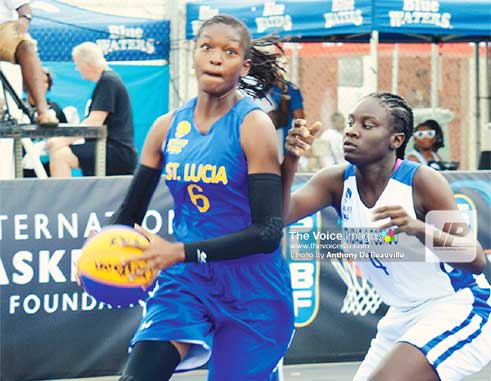 On Saturday, the Saint Lucia women were first on court and defeated Trinidad and Tobago by 7-5. Growing in confidence, the home team went on to win all of their matches on the day, before going down to Guadeloupe 2-5.

Team Martinique (women) dominated every opponent in the preliminary round. In the semifinals, they defeated Sint Maarten 6-2 and trounced Saint Lucia 12-2 in the final to claim the inaugural championship trophy despite the home team showing strong determination.

In the men’s division, Saint Lucia started on a solid footing by defeating Trinidad and Tobago 13-4 but went on to win one and lose two of their remaining matches and failed to make it to the semifinal on Sunday evening.

Like their female counterparts, Martinique continued their good run of form throughout. They defeated Antigua and Barbuda 10-1 in the semifinals and had a nail-biting 8-7 win over Guyana in the final after the scores were locked at 3-3 during the official technical timeout.

The Martiniquans went up 5-3 with 2 minutes left on the clock but Guyana came back to equalize at 5-5. Martinique surged ahead again, making it 7-6 with 55 seconds remaining. Guyana, with a never-say-die attitude, went on to equalize yet again (7-7) with 12 seconds to play.

By then, the Martiniquan women on the sidelines were the loudest as they urged their male counterparts to keep fighting for the victory. With 5 seconds remaining on the clock, Martinique came up big to seal the victory.

EmrickFoocan of Martinique was the tournament’s Most Valuable Player (male).