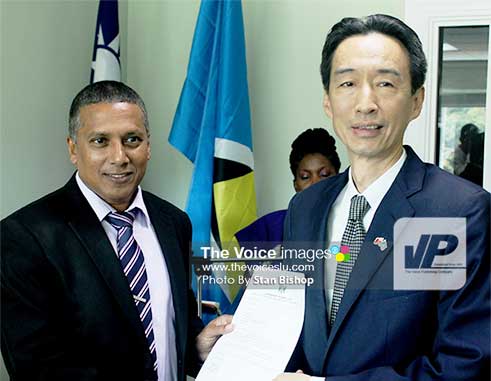 TAIWAN’S Ambassador to Saint Lucia, Ray Mou, presented a cheque for $250,000 to Minister for Economic Development, Guy Joseph, to fund the second phase of the Sarrot Multi-Purpose Court.

The handover, which took place at the Financial Administration Building last Thursday, seeks to bring to fruition a project that has remained incomplete for some time now.

Witnessing the presentation were Permanent Secretary in the Department of Economic Development, Tracy Polius and Melisa Andrew of the Accountant General’s Department, the latter to whom Joseph subsequently presented the cheque.

Work on the project dates back to 2011 when the area’s MP, Guy Joseph, was in government with the Taiwanese government funding the initial phase through the Constituency Development Programme (CDP). However, the project was never completed.

Ambassador Mou said the project needed finality so that residents can use the facility for various activities, including as a place for recreation.

“We understand that this multi-purpose court is in a very highly dense population of Castries South-East,” he said.

He added: “For now, we’re happy to see that this project is almost nearly completed. My office has joined the construction expert to observe the development of the (project),” Ambassador Mou said.

The project, which costs nearly $650,000 in total, consists of two floors which will house a conference area and an open space for various activities. The Ambassador said Taiwan remains committed to deepening its bilateral ties with Saint Lucia via various programmes in the future.

“I would like to extend my government’s staunch support again to Saint Lucia,” Ambassador Mou said. “At the beginning of the new year, I expressed that we will continue to do many new projects and also carry on with the already existing solid cooperation such as the CDP. We are looking forward to having another CDP cooperation fund coming soon.”

In thanking the ambassador for the latest donation, Joseph said many communities have benefitted immensely from the generosity of the Taiwanese government, which has redounded to improving the quality of life for many. However, he said government was mulling partnering with the Taiwanese to broaden the programme’s scope.

Joseph said the goal is to complete the project in time for a grand opening to coincide with this year’s Independence. With recreational space being a limited resource in Sarrot, Joseph said the new edifice – which measures 2,400 square feet on the ground floor and a 60 feet by 80 feet multi-purpose court – will change the lives of residents in many ways, including offering classes in Mathematics.