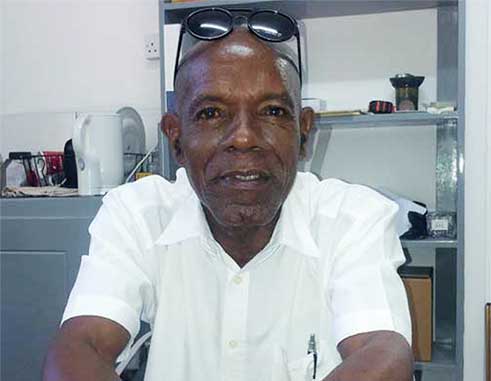 IN an argument, it is always best to hear all sides of the story and so, when James Joseph, Interim President of the Micoud South Development Foundation proclaimed himself in favour of the controversial Desert Star Holding project promised for Vieux Fort, it dawned on me that he would be a good subject for this week’s FITC.

Joseph who said that he is also trained in land economics and planning and development, did not mince his words when airing his views.

The VOICE: It is refreshing to find someone who is in support for the DSH project, especially since you are from the South of the island yourself and the majority of the voices from the South thus far have been voices of opposition and concern. So please, let me hear your thoughts on the project.

Joseph: My point of view is going to be from a trained person’s point of view. Furthermore, I’m from the South and I’m not hearing people being against it in the south, so there is some propaganda going on, and not just propaganda, but politics. I believe there are certain factions that are not conceding or accepting defeat. That the politics is starting all over again, as if we are preparing for a brand new election. But what I know from my personal experience and observation in the South is that 90% of people are for it because we don’t know when last there were comprehensive employment opportunities in the South. What I could recall is in the days of Halcyon Days hotel people from Micoud, Vieux Fort, Laborie, Choiseul, a few from Soufriere and probably up to Dennery were being employed. Thats an example of one project serving the basic employment needs of the people from the South. And that’s what people are looking forward to in terms of employment and their survival in due time. You see, because what we are understanding lately is that the horse track will be ready by November of this year, and apart from that, it is obvious that we need the employment it will provide…Bananas DONE! So what are the people in the South doing now then? Because they were mostly farmers and so, why are people from the North saying that the South does not want it? That’s not true! I’m in a position to know of the latest developments in the South. At the moment, I’m the Interim President of the Micoud South Development Foundation, and so my ears and eyes are opened…in other words, I have to be on the ball, and as I said before, I’m trained in urban and rural development, and so I know the usefulness of such a project and why it’s needed.

The VOICE: in actuality, the concerns being aired go further than the one aspect that you just spoke of. Some of those concerns include the leasing of a large area of land for only US $1 per acre for 99 years, as well as the fact that people’s homes and businesses might be at stake. So what do you have to say about that aspect?

Joseph: There are those who don’t understand the broad nature of the projects and are making judgements and pre-empting but there is a need for further explanation, and whoever is proposing the project, including the government, need not take things lightly. There is a certain amount of distrust concerning the project, so there needs to be some enlightenment, and the government or whoever is proposing that project, they need to meet with the people to give further explanation. Let me further explain, there is the issue with the US $1 per acre for that period of time, we can say is in perpetuity. Now let’s say for the time being, that land is fallow; and not earning anything at this time. If we are going to with $1, then we have moved from zero, haven’t we? So that’s already in the plus, but what about the windfall gains, the thousands of people from the south who will be employed.

The VOICE: What do you think about the concerns over Sandy Beach and the possibility that it will be unavailable for public access or at least, not easily accessible?

Joseph: I don’t know that there will be any restriction to the Queen’s Chain…that is a beach that has always been accessible. As far as I read about the project, there is nothing in there about restrictions as to who can and can’t bathe. Any operation would have to fit the national and international standard…we cannot operate at no standard at all. Why do we expect it to be a free for all? That’s not how it works; we have to operate at a minimum standard, although I don’t know what that minimum standard is yet because I don’t know of any restrictions being mentioned. It’s all simply in people’s minds. The last thing I read about project, was that there would be no restrictions for locals…it’s all imagined. I’ll tell you what, destruction is only performed by those who benefit from it. If I benefit from destroying the project, why should I talk good about it? What is the motive of those who have not embraced such a project that would employ every employable person in the south that would benefit life for the next 25 years?

The VOICE: But aren’t those same people at risk of losing that very livelihood that you are speaking about?

Joseph: There will be a level of shock and so we should take preventative measures to ease this shock like mentoring, sensitisation and compensation. I have also heard that there is a plan to relocate the people of the shanty towns. This is the type of intervention that will be needed in this project. It’s a novel project and it’s worth experiencing. These projects exist within Asia and the U.S. (Prime Minister) Chastanet did deliberately go out and do due diligence to find out the implications in terms of this project. It is still puzzling to me as to why this was kept out of the public domain by the opposition when they were the ones who initiated the project in the first place. But anyhow, from my background, training and understanding of the project, as well as my experience of being from the south, it is a project that I embrace wholeheartedly and I hope that all the fine tuning that is needed will be done.