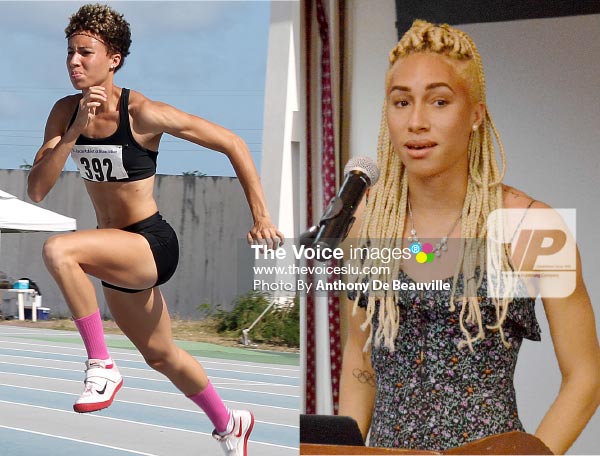 ‘I Just Want To Be Accessible To You’

ONE of Saint Lucia’s female athletes who competed at 2016 Olympic Games in Brazil had a few words of encouragement to those in attendance at the recently-held Elite track and field club annual awards at Bay Gardens Resort and Spa in Rodney Bay.

World-ranked high jumper Jeannelle Scheper was in scintillating form off the track with her inspiring words, using the theme for the evening, “Investing now for the future”.

During her brief stay at the podium, she told the young athletes: “I hope that I can create some level of comfort for you to feel like you can reach out to me for help, advice, counsel, motivation — whatever it may be. I just want to be accessible to you.”

Scheper said she always loved travelling and that upon learning that track and field athletes travelled the world to compete, was immediately interested.

“I remember being approached by Mrs. Mary Ann Martial-Montoute, former Physical Education teacher at St. Joseph’s Convent, to try out the high jump, since I was tall,” Scheper said.

At the time, the former SJC student knew about the CARIFTA Games and immediately got interested, telling Martial-Montoute she was going to make the team the following year.

Scheper said: “I am so passionate about travelling, it makes me happy and gives me joy. This really motivated me to go to training and listen to my coaches, which turned out to be the first and probably the most important investment I made.”

After making the CARIFTA team and a few more junior teams thereafter, Scheper was mostly committed. She noted: “I definitely could have trained more consistently and put in some extra work. At that point, my motivation to train was travelling, but since I had already achieved the goal of making a travel squad, I wasn’t investing into my sporting career as I should have anymore.”

She continued: “In 2010 at the CARIFTA Games in Cayman Islands, I met a coach from the University of South Carolina who approached me after I had competed. He was interested in telling me about the university and that was when I learned about the possibility of athletic scholarships.”

She continued: “Right there I got my second wave of motivation and again my passion was inspired. Here was an opportunity to go to study in the U.S. for free! All I wanted to do was go to university abroad and here was the perfect chance! My parents would have had to re-mortgage the house to send me to school, so I had to find my own way. Now that I had the motivation, I trained harder, more often and did all the research I needed to figure out how I would get that scholarship. I took my SATs and the following January, I was enrolled. Here I had made the second investment.”

Her freshman year in college was anything but spectacular, she said.

“I hadn’t put up any good marks and was having trouble coping with the transition in terms of the new food, culture, facilities and more. Again, my motivation was wavering. I was unhappy with my performance and my college athletics dream was slowly deflating. After feeling this way for some time, something changed my perspective. I saw people having success and, of course, like any competitor, hated losing so that motivated me to never have that experience again. Unlike the previous times I found the drive to keep going, this motivation did not necessarily come from a positive place. But like I said in the beginning, whatever inspires your passion will motivate you and I was certainly inspired to end this losing streak. That summer I trained harder than I ever had before. I went on extra runs, ate better, saw the nutritionist and tried to figure out how I was going to be better.

“The Southeastern Conference is the most competitive conference in track and field in the United States and I wanted to win. That was my new motivation and I made the necessary next investment.

“As you can probably guess from the pattern of the story I am telling, eventually my enthusiasm started to waiver and I needed to find something to encourage me to continue on the path I started. I really do love to compete, but I could not help but think that the next best thing was being able to do what I love which was high jumping and travelling while sustaining a living from it.

“Finding out that I could pursue the professional aspect of my sport really piqued my interest and it was the only thing I felt like I wanted to do from then on. After winning the Southeastern Conference in my junior year, and red-shirting that outdoor season, I was pumped for senior year. I wanted to win Nationals and really up my chances of being signed with an agent and, hopefully, a shoe company.

“My coach and I had put in so many hours, not only on the track but in the office watching videos, talking over the phone about practices or just trying to plan how best we could get better training-wise. It all paid off when I won Nationals at the end of my senior year in my last season. That night I spoke to an agent whom I would later sign with and start my career as a professional athlete. Winning Nationals was the investment I had to prepare for and achieve in order to set up the future I wanted as a professional athlete. So there again, I made another investment.

“In conclusion, I hope you have gotten to see that it’s not only important to make investments in your future but to have the right motivation. Somewhere along the line you have to figure out what it is that really inspires you and what it is you are really passionate about.

“Once you know what that is, you can let this fuel your actions and it will be easy to make investments into the future that makes you the most happy. Whether that motivation is the love of travel, the opportunity to go to school or pursuing the perfect career for you, once you know what your passion is, making the plans and doing what’s hard right now for the future, your want will become much easier.”