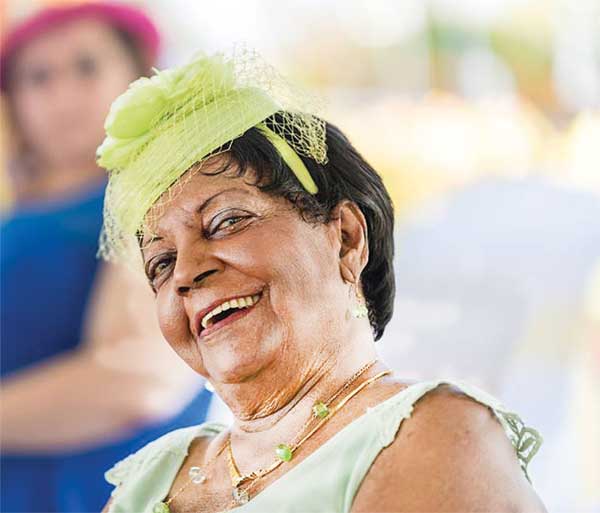 Seeing that this is our final paper for the year 2016, I figured I would end it with a bang and a twist.

This is because, this week’s WOTW doesn’t even know she’s being featured.

This year has had its high points and low points (many will say that there were more lows than highs); however, I am going to use this platform to highlight a Super “Shero” that has undoubtedly made an enormous mark on this world, so needless to say, this WOTW is definitely a high for me.

Today, many might have heard of the classy and beautiful Cynthia Williams or have seen her pasted all over the Facebook page of her daughter Sharon Williams; however, this lady most certainly does not need her PR maven daughter’s coat tails to ride on, as she has built quite the legacy for herself…by herself.

This mother of eight has lived a full life and even with the toughest of trials, she has been able to do it all with regal and unwavering grace and dignity.

Williams is a retired teacher of…wait for it…48 years (more than a lifetime for me) and began educating and changing young lives from the unbelievably tender age of 12 as a student teacher.

Although she dedicated more than half her life to teaching, which in itself is a feat that’s beyond admirable and amazing, it was all still second fiddle to her very first and biggest responsibility…being a mother.

Williams you see, became a widow in 1973, and so, whilst taking on a full time job as a teacher, she was also a full time mother raising her eight children on her own.

Now I know you’re thinking: “How is it possible to be a full time teacher and a full time mother at the same time?” Well, for a mere human, it’s impossible, but for Super Sheroes like Williams, it was doable and it was DONE!

Oh and might I add that she did it well too?!

In a birthday post on social media earlier this week, her proud daughter Sharon said this about her: “My mother taught me and so many others who passed under her tutelage so much about life, the world around us and most importantly how to be strong and show grace no matter the situation. My mother is the strongest person I know and displayed that strength and strength of character to everyone including her eight children (4 boys and 4 girls including one set of twins), at a time when it was not fashionable to be a ‘strong woman’ and the “empowerment of women” had not yet even been coined!

I have so much to be grateful for because of this woman who lived life, and taught lessons that I sucked up, not even realising that I was receiving invaluable standards, morals, values, and not to mention just simple good sense…so much that I hope I’ve passed it all on to the next generation, especially my own two daughters.”

Amidst all that, grief and heartache has not spared Williams, because even after the death of her husband, she has had to endure the loss of three children; however, according to, sharon her amazing grace and strength has carried her through the pain and losses.

Now at her age, (I will not dare reveal it lest I get cut down to size) I asked her daughter to reveal just how she manages to look this good and still walk around with her wedged heels and wear dresses and hats that would put millennials in the shade…the response was: “She takes life as it comes, and does not dwell on stuff she never could control. She didn’t have the time or luxury to wallow. With eight children and a career who has the time? Plus she has good genes which I hope I’ve inherited! My grandmother died at 92 and she looked 70.”

I swear, this lady is sipping from the fountain of youth or something because her “Fabulousity” is out of this world…and to think that she got there through pure strength and perseverance…but then again, a diamond is formed under tonnes of pressure and heat right? So that should explain how this diamond has continued to thrive and shine brighter through it all over the years.

Now, like I mentioned at the start, she does not know that she is being featured, so I have no secret of hers to share, but you know what? Since we’re doing this with a twist, I’ll just flip the script and let this homage be my secret to reveal to her.