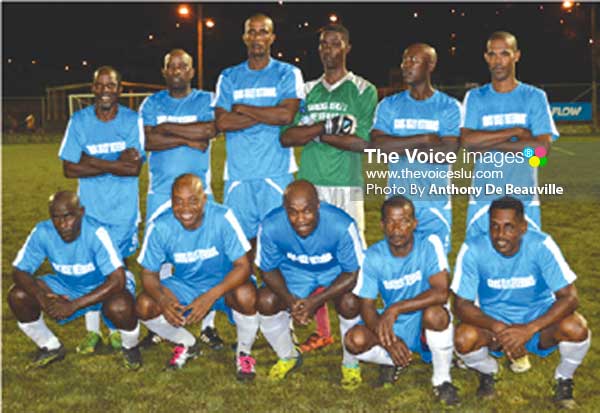 THE Veterans Football tournament organized by Veterans In Sports Inc. and Caribbean Alliance Insurance enters its final round of preliminaries tomorrow with four interesting matches scheduled at the Sab Sporting Facility.

From 9:00 a.m. in a Group C encounter, Gros Islet on three points will play All Blacks of Dennery who are at the bottom of the table with zero points.

Interestingly, a 4-0 win for Gros Islet will see them tie on 6 points with both Micoud and Central Vieux Fort, but will advance on goal difference ahead of Micoud. On the other hand, the All Blacks will have none of that as they will want to make amends for their 1-0 defeat at the hands of Micoud last weekend after squandering 10 easy scoring opportunities.

At 11:00 a.m. Caricom Masters will play Anse la Raye. The Masters currently head Group D on 6 points with 10 goals for and 1 against and with two hat-trick goal scorers in their midst in the persons of Roger Celestin and Godfrey Alfred.

With three points, Anse la Raye’s leading goal scorer Benjamin Gabriel will look to make life difficult for the opposition as a win over Caricom Masters could see them through, but they will have to wait a further 90 minutes for the outcome of the next encounter between Prophets and Kings and Mon Repos Sharks which is itself an all-important encounter for the Prophets. Their fate will depend how well they play against the first timers who are currently at the bottom of Group D with zero points from two games and a whopping 9 goals against.

Mon Repos Sharks despite their two previous defeats cannot be underestimated and like any other team they will want to make amends as they search for their first win and to salvage some pride.

The showpiece will shift into high gear at 4:00 p.m. when Group B leaders and former champions VSADC will play Congorians in another all-important matchup for Congorians last year’s runners-up. This one is a must-win for Congorians, which will catapult them ahead of FLOW Lancers FC with 5 points and in the process booting them out of contention.

So it’s all to play for as all eyes, especially the technical staff of FLOW Lancers FC will be watching this one on the sidelines with deep interest.

From here on, the tournament takes a break for the festive season and will resume with the knockout stage (quarterfinals) of the Plate Championship on 7 and 8 January, 2017.