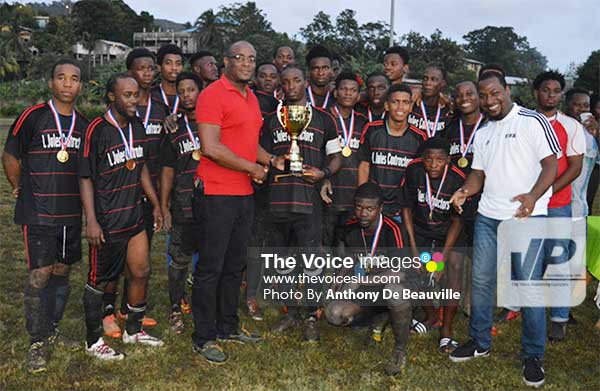 Curtains Come Down On Football Season.

The matchup between the two teams lived up to expectations despite the conditions on the playing surface not being perfect. A crowd of about 1200 football fans did not regret the outing, either.

Survivals opened the scoring in the 4th minute when Pecus Etienne’s right foot shot to goal eluded the Aux Lyon United goalkeeper to make it 1-0.

Two minutes afterwards, Survivals made it 2-0 when they were given a penalty kick for a reckless tackle to one of their players with prolific striker Vernon Abbott striking home a powerful right foot shot past the Aux Lyon United goalkeeper.

Aux Lyon United, with 2-0 down and their crowd support still chanting behind them, never allowed their heads to drop as they continued pushing for a goal. With perseverance, luck soon came their way as Julius Louisy cut the deficit by one from the penalty spot kick in the 19th minute after the referee ruled that a Survivals player had handled the ball.

It was celebration time as Survivals went on to extend their lead in the 34th minute with Dillan Alfred’s strike to goal eluding the Aux Lyon United goalkeeper to the delight of his teammates and supporters.

On the resumption, both sides looked all set for business coming out of the dressing room. But as in previous matches, they failed to score during the second half up until Referee Leo Clarke’s final whistle despite numerous opportunities.

Edward thanked the participating teams for showcasing their talent in this year’s tournament, as well as the many fans who turned out to support the various teams.

President of the Mabouya Valley Football League, Kendal Emmanuel said, “This is the third tournament the league hosted for 2016 and it was competitive from start to finish. We are happy we can now draw the curtains and look forward towards 2017.”

He continued, “Our performance on the national stage still remains a concern in terms of our results. In the Blackheart tournament, we were trounced by Gros Islet 6-2 and failed to qualify for the group stage of the Saint Lucia Football Association/Vizions Under-21 men’s tournament. Based on these poor performances, we have to go back to the drawing board and better our programmes and get our young players in the right frame of mind so that when they go out to represent the league they will be in a position to perform at the highest level.”