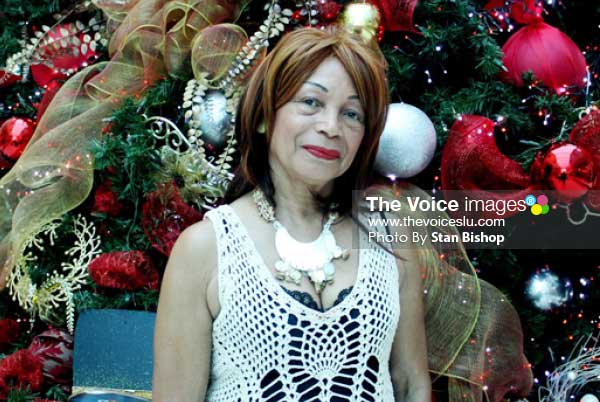 Songstress Speaks About Her Career, Life and Comeback.

TO many people who truly appreciate great music, the name Patsy Cadet conjures up nostalgia, classy performances and a steely passion to hit all the right notes in a song. For decades, this matriarch of music dominated stages, airwaves and hearts. Today, she’s set to do it all over again.

Cadet was born in Castries. Her mother, Salome, was from Dominica and father, Magras. from Saint Lucia. Her paternal grandfather was from Switzerland while her maternal grandmother was from Barbados. Her real first name is actually Praxede, whom she tells me, was a young Roman girl who was martyred. Cadet was born on her namesake’s feast day, July 21, “and like her, I’ve suffered a bit.”

Cadet recalls her childhood when a woman from her community, Mrs. Gregg, would take her to Sunday School sessions with her mother’s permission. Her passion for music was on the rise, especially when she attended Ave Maria Girls’ Primary School where she was involved in skits toward the end of each school term.

After enrolling at Vide Bouteille Secondary School, Cadet’s interest in music went up a few octaves. Things got even more musical for her when she attended St. Joseph’s Convent. As part of the Ranger Movement, students were often called on to participate in various fundraisers for the poor. As part of the school choir, she was involved in a great deal of charitable work.

Cadet admits that she never had dreams of pursuing a career in music. While she had a knack for the stage, she said she wanted to rip the runway. Her graceful looks and warm personality, she said, were great assets for the job, anyway.

“I wanted to be a model. I never thought small of myself: I was always dreaming of being a model on a big stage. I dreamed about singing while modeling with a big band backing me up. Later, I decided that I wanted to be an interior designer,” she tells me.

However big her dreams were, Cadet said she was disillusioned at age 16 when a woman told her she dreamed too big when she said she wanted to become a detective. She clammed up for a while but decided to pursue her dreams nonetheless.

“One year, we did a pantomime show at St. Joseph’s Convent and everything seemed to have gone down so beautifully that I became well-known,” Cadet said. “From then on, everything the Jaycees did to raise funds, they would involve me. I was even asked to compete in the Queen Show in 1967, an invitation I immediately declined, but chose to sing at the show instead. So that’s where I made my big debut.”

Cadet went on to work with some of the island’s best entertainers, including the Tru Tones and Emile Forde (the latter with whom she recorded an album, “Love In Visual Stereo”, between 1967 and 1968). At one point, she and her husband, David Edwards, practiced in his mother’s living room and organized various shows.
The iconic balladeer has performed in many countries, including Guyana, Grenada, Martinique, Guadeloupe, French Guiana, Suriname, Canada, St. Croix, the United Kingdom and the United States of America. In the 1970s, she toured New York, Philadelphia, Washington D.C., Montreal and Toronto, accompanied by Tru Tones front man, Ronald “Boo” Hinkson.

Cadet specializes in ballads and jazz classics. However, one of the lesser known facts about her is that not many people know she also sings in creole. The soprano explained that while performing on the hotel circuit, she was forced to learn a bit of everything musical.

Despite doing covers of other musicians’ works, Cadet also has original music, some of which was written by a Barbadian composer. “Bad Situation” was one of those songs and many Cadet fans still cherish it as their best. Another of her songs was “You Light Up My Life”.

Cadet lists Miriam Makeba, Harry Belafonte, Dinah Washington and Nancy Wilson among her musical influences. Not unlike her idols, she found it difficult keeping it all together in trying to build a professional career and attend to domestic duties.

“It was always very difficult for me holding down a career because I was not always without responsibilities. I had to be very careful about dividing my time between performing and taking care of my mother who suffered a stroke. Then came my marriage and motherhood. So it really was a balancing act that saw me working during the day following which I had rehearsals for my performances at night. It just was not easy,” Cadet explained.

Even while holding down a career and tending to her family, Cadet still found time to do what she enjoyed doing long before she launched her professional career: being charitable. Her yeoman service has seen her visiting the prison, hospitals, schools and homes to cheer people up with her voice that to this day seems flawless.

Inasmuch as music has taken her places and made her into a household name, Cadet said she is pleased that she remained grounded throughout the process. She believes too many performers think they have to lose their integrity just to stay in the limelight. For Cadet, being an ambassador for the job she loves matters more than having to fit into a false mould.

Some years ago, Cadet left Saint Lucia and settled in Grenada after becoming disillusioned on her home soil. She felt she was being given the cold shoulder as far as getting gigs in Saint Lucia was concerned. Essentially, the message she was getting was that her kind of music had passed its prime.

After performing on the hotel circuit with some of the best bands for some years in the Spice Isle, Cadet returned to Saint Lucia to pick up where she had painfully left off. It turns out that the former chart-topper’s task is going to be a long, frustrating one.

“Returning to Saint Lucia in 1999, I discovered that there was such a big gap and that it would take a great deal before I can get back into my field,” the Rodney Bay resident said. “Unfortunately, things never really picked up and I never got back to where I used to be. The whole scene had changed.”

Gig or no gig, Cadet still has hopes of performing on the Saint Lucia Jazz & Arts Festival Main Stage before – or if – she ends her singing career. She also longs to become popular among today’s generation, many of whom might only know about her through researching information for their School-Based Assessments. For some time now, Cadet has been baking cakes and pastries which she sells to small shops and Massy Stores to pay the bills.

The legendary songstress recently released a single, “We Found Each Other”, written by Barbara Bully-Thomas, as well as a remake of one of her songs, “My Love Forgive Me”, from the album she recorded with Forde.

Cadet credits everyone who would have contributed to her musical success over the years. She promises to become more visible – and vocal – in the new year as she picks up her musical pieces.

“I’m back and I’m here. I just have to put a few things together. But I have a lot of plans,” Cadet said.

Her advice for anyone wanting to accomplish their goals is a personal: one that has seen her transform from being a disillusioned teenager to touching the stars: “Don’t allow anyone to steal your dreams. Even if you face the hurdles, take your time, jump slowly and don’t trip. Always have a Plan B, too.”