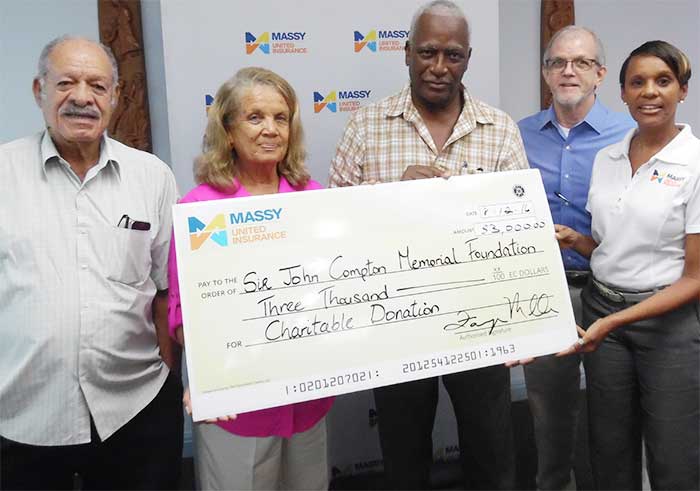 MASSY United Insurance has made a donation to the Sir John Compton Memorial Foundation.

Traditionally, at Christmas time, Massy United would express their appreciation for the support and patronage of their clientele with a token gift of thanks. This year, however, the decision was made to celebrate the spirit of the season of giving by sharing with those less fortunate in the community they serve.

There is an old adage, which very accurately sums up a much cherished value in the Caribbean – “It takes a village to raise a child”. Massy United Insurance decided to make a financial donation of $3,000.00 to the Sir John Compton Memorial Foundation, a charity formed in November 2009, aimed at facilitating educational opportunities for St Lucians.

Seen here is Anthony Bergasse, Chairman of United Insurance Agents (Saint Lucia) Ltd, Agents for Massy United Insurance, Faye Miller, General Manager of the company and Director Hollis Bristol presenting their cheque to a very appreciative Lady Janice Compton, wife of the late Sir John Compton and Bernard Theobalds, one of the trustees of the Foundation.

On the occasion of the cheque presentation, Lady Compton expressed her gratitude to the company describing the donation as a ‘God-send’ which she has earmarked for CXC examination fees of a number of needy students.

Anthony Bergasse wished the Foundation the very best in their continued efforts to transform the lives of Saint Lucian youth.

To date the Foundation has financed the education of numerous St Lucian students both at home and abroad.

Sir John was St Lucia’s longest serving leader and headed the government for 30 years in three spells. He presided over the most recent constitutional advancements for St Lucia, self government in 1967 and independence in 1979. He is generally regarded as the “Father of the Nation”, although he himself described the title as a misnomer.