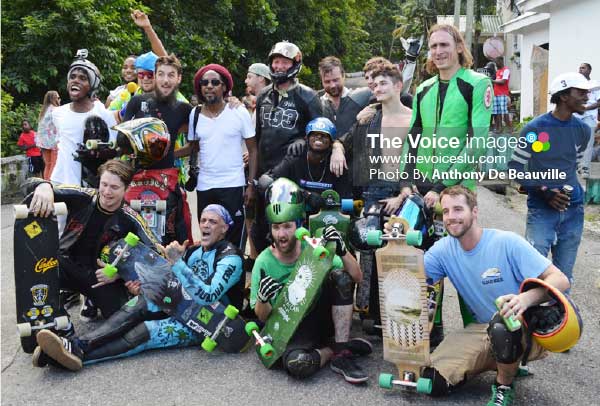 THE inaugural Long Board event in Castries on Tuesday saved the day for a number of sports enthusiasts who were looking for some kind of exciting activity on the island’s National Day.

Fans lined the route from the junction of Bois Catchet to the bottom of old Morne Road to take in what can best be described as an event of “daring” as 18 competitors jostled for positions and leads.

With no cycling event around the City Circuit this year, the Long Board event in itself was a joy for the many families who needed some kind of sporting entertainment.

The first race, started just after 1:00 p.m. with all the competitors, was making good speed. Then came the rain that made life a bit dangerous for the participants. At that point two of the participants decided to quit, but Mother Nature quickly took care of business and the sun came out in all its glory to quickly dry out any moisture on the asphalt and the two participants were back in action.

Throughout the 10 races, a total of 38 crashes were recorded and fortunately none was serious to require any immediate medical attention or ambulance services, although pieces of trousers and skin were evident on the road.

With the final event on the card the heavens opened again and that made life even more difficult as the riders made their way to the finish line, at least two crashing into the protective barriers at the finish line and another into the wall leading up to the Morne. Still that did not stop the big man from Alaska Will Royce from finishing first. He was closely followed by Johnny Chapelle and Raggie English in that order.

Saint Lucia’s two competitors Amarcisse Alexander age 19 and Kwane Francis, 20, finished 15th and 16th respectively. Though the two were not flamboyant in terms of speed like the others in the pack, they were able to weather the storm amongst some of the World’s best competitor in the business.