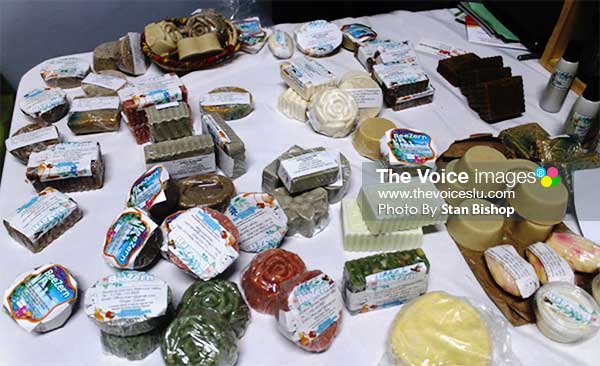 IN the dictionary, the definition of the word “ingenuity” is “the quality of being clever, original, and inventive, often in the process of applying ideas to solve problems or meet challenges”. It is a word that has influenced pioneers throughout history, leading them to invent things that have made our lives more comfortable and livable.

However, Elton Joseph of Mabouya Valley, Dennery took ingenuity to another level when his fatherly instincts quickened him to find a solution to his newborn daughter Christina’s skin condition three years ago.

“When she was born, her skin was very sensitive and we could not use regular soaps to bathe her. So I had to develop my own. Right now, her skin is beautiful and flawless,” Joseph explained.

Joseph, who is also a member of the St. Lucian Association of Beekeepers (SLAB) Ltd, said it was painstakingly difficult trying to source the right soaps that would work well on his daughter’s skin at the time.

Fortuitously, around the time Christina was born, he joined a soap making workshop in Belmont, Dennery organized by the beekeeping association. As time went by, participants dropped out of the workshop. However, Joseph had more than one special reason to remain.

“I saw the workshop as a way of gaining a skill that I could use to create employment for myself,” Joseph said. “I also knew that I had to find a way to treat my daughter’s skin.”

“I usually earn my living as a baker. However, I really want to concentrate on my soap business full-time. I want to tap into the supermarkets, hotels and spas,” he said.

Joseph’s business, BeeZern, was among the 65 Saint Lucian companies that participated in the Saint Lucia-Taiwan Partnership Trade Exhibition last week. Despite being a first-time participant, he said the feedback from customers has been positive.

“It’s been good so far. Sales have been favourable. However, I came to the exhibition for the primary reason of introducing people to my products,” the businessman said.

Joseph is also keen on expanding his business and is inviting anyone with an interest in either investing in the business or learning the soap making craft from him. Being a small businessman, he recognizes that it will take some time and patience to realize the next step of his dream.

“It’s been a challenge so far, but you never give up if you really want to succeed. I’m into the first year of actually putting my soaps out there in a big way but I’ve been in business since 2013. So I remain hopeful,” Joseph explained.

For anyone second-guessing their entry into business, Joseph offers the simplest advice that often leads to the greatest rewards: “Never give up on anything that you’re trying to accomplish because it’s never easy. Just keep at it and you will get there someday.”

Joseph’s story ends right back where it all started – with Christina. She might be too young to understand it now but her father is already making plans to immortalize her in the best ways he knows how: through his dedicated love for her and an unwavering passion for business.

“I’m currently working on a special soap which I intend to name after my daughter,” the teary-eyed father said. “She’s the last of my five children and the only girl. She’s also my biggest inspiration.”

For more information on Joseph’s products, contact him at 713 4339 or eltonjoseph51@gmail.com.