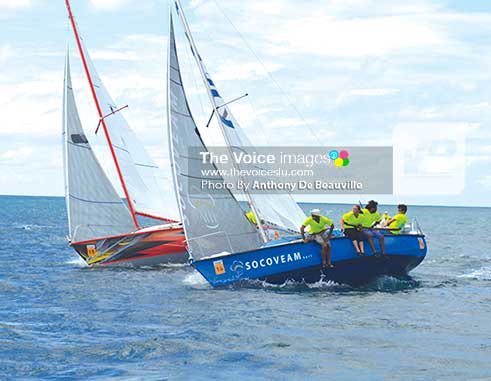 THE Digicel Mango Bowl Regatta hosted by the Saint Lucia Yacht Club brought over 150 sailors to Saint Lucia this past weekend. Blessed once more with beautiful weather and great racing conditions in Rodney Bay, the 5th annual event has been dubbed as “fantastic” despite an accident just off the Le Sport Hotel involving “Ten Seven” and “Leonora”.

Over the two days competition that included five classes of racing in the Cruising 1 and 2, Racing, J24, a total entry of 24 boats — with a combined 15 coming from Grenada, Trinidad and Tobago, Barbados and Martinique and host Saint Lucia – helped to make the tourism sporting event successful.

After five long exciting races on what competitors agree to be the best course in the region — which took boats out around Pigeon Island to Le Sport — Saint Lucia’s “Jaystar” came to the finish line first in the Cruising 1 Class followed by Bajan boats, “Ten Seven” and “Leonora”. The Cruising 2 class saw Saint Lucia’s “Papagayo” finishing in first place followed by Bajan boat, “Mandy”.

Following the collision between “Ten Seven” and “Leonora”, the former was eventually towed in by “Sea Titan” owned by Dive Saint Lucia after members of the Saint Lucia Marine Police said they were not allowed to tow damaged vessels into port. Nevertheless, the Marine Police stayed around to ensure that “Ten Seven” was safely towed into the IGY Marina tied alongside the “Sea Titan”.

Captain of “Ten Seven”, Steve Leheup, told The VOICE that upon turning at the marker, the steering wheel suddenly seized while “Leonora” was simultaneously making the turn, resulting in the two yachts colliding.

With an SOS sent out via radio, Dive Saint Lucia went to their rescue and the four-member crew is expected to return to Barbados this week and then back to Saint Lucia to finish up repairs.

Meanwhile, in the Racing, J24 and Surprise classes there were 10 races with the following results:

Following the two days of competition, winners received the traditional Mango Bowl trophy and other prizes.

Saint Lucia’s Mango Bowl Regatta has been a much-anticipated regatta for the past five years and is referred to by sailors as the best in the region, with the best race course of any regatta.

Telecommunications companyDigicel will for the next three years partner with the organizers of the event to host the Mango Bowl Regatta. The SLYC says it will continue to bring in sailors from the region so as to boost the sports tourism industry and make a mark for Saint Lucia on the Caribbean yachting and sailing calendars.