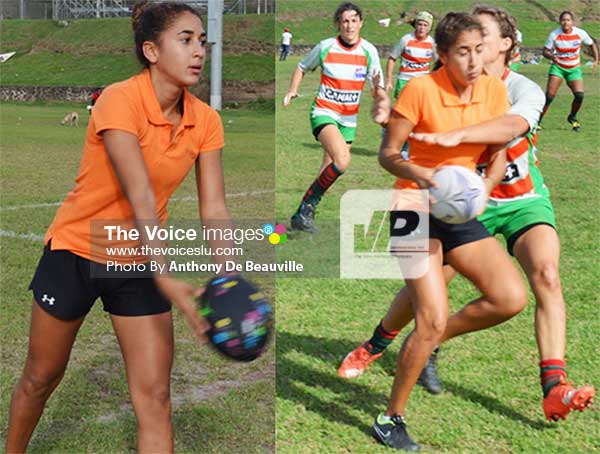 SHE is originally from Toronto, Canada; she graduated from the University of Toronto last year with an honours specialist degree in international development studies and a double minor in political science and economics. But she also has her eyes set on making a name for herself in the sport of rugby.

Emma Mills-George caught my attention with her lightning speed and movement despite the poor playing conditions at the Gros Islet playing field during the Saint Lucia Rugby Football Union’s one day tournament held recently where she played against a visiting all female Guadeloupe Rugby Team.

In the recent one day tournament, Le Sport Body Holidays defeated Guadeloupe 17 – 10 and Whiptail 5 – 0 but lost to Guadeloupe in the finals 17 – 12, finishing a creditable second.

I asked Mills-George about her involvement in rugby:

VOICE: How did it all happen for you in Rugby?

Mills-George: I started playing back in high school. I had just received my black belt in Taekwondo and stopped rowing competitively so I really needed to pick a new sport and the school I attended had a very strong rugby programme.

VOICE: Who encourage you to play Rugby?

Mills-George: I got into it myself. I actually didn’t tell my parents I was trying out for the team until I made the starting line and could justify it to them. My dad wasn’t a big fan of me playing contact sports.

VOICE: Do your parents encourage/s you and support you at the various sporting events.

Emma: Yes, they came around pretty fast after watching me play in high school. My dad is very supportive and actually came down to Saint Lucia from Toronto to see me play against the Guadeloupe team which was nice.

VOICE: What’s your position on the field?

VOICE: How do you prepare for a championship?

Mills-George: I train extremely hard and stock up on carbohydrates.

VOICE: How many times you have represented Le Sport Body Holiday?

Mills-George: Only twice, in the tournament that just passed and at the beach rugby tournament in November.

VOICE: What has been Le Sport Body Holiday’s best finish at a local championship?

Mills-George: We recently won the beach rugby tournament. It was a clean sweep, winning all three games against the Whiptails.

Voice: How far would you like to go in Rugby?

Mills-George: Playing at a high level would be incredible. Caribbean Championship sound great, but for now I am just in it for leisure.

VOICE: What do you do during your spare time, when not in training or playing a championship?

Mills-George: Anything outdoors if I can. I have been learning how to Kitesurf and also competed in my first triathlon last month.

VOICE: What advice have you for a young aspiring Rugby player? Let’s say in the under 16 years category.

Mills-George: My advice would be to get involved, start playing and training hard. Try out different positions and really play the field, find what works best for you. You don’t need to be scoring all the tries to be a great player, there is a lot of value in playing a strong supporting position.