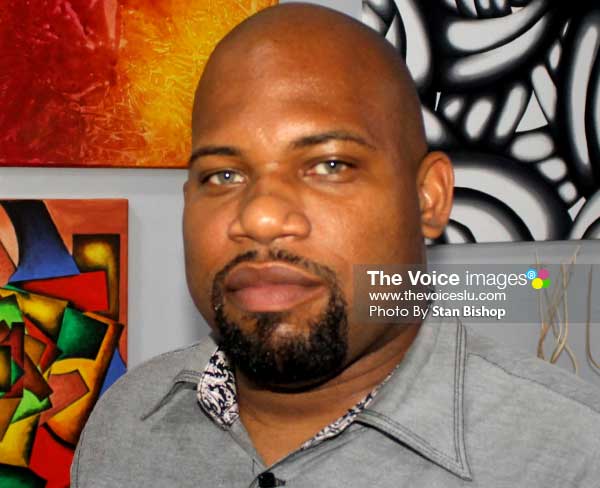 EVER since enrolling at St. Mary’s College in 1996, Denver Pierre has seen his interest in art skyrocket from simply being a subject on the curriculum to becoming his number one passion and major revenue earner. Nevertheless, the thirtysomething year old artist continues to push the boundaries of art. In fact, he’s on a mission to push that boundary right into our homes.

But let’s begin where Pierre’s artistic journey really began, shall we?

Pierre recalls his creative juices flowing out of the proverbial jar under the tutelage of his first art teacher, Luigi St. Omer, and later Ted Sandiford, both of whom he credits for being the influential forces in his development as an artist in those formative years.

The young student became so immersed and dedicated to his craft that he even picked up the school’s award for Best Artist when he graduated. As he did back then, Pierre said he still tries to hit a high mark on every project he works on, thereby leaving his customers mesmerized and convinced that they get value for money.

“If you go through my report cards from school, you would notice that I received a 100% pass mark for art each school term. I believe in excellence, so I try to take whatever I do to a whole new level,” Pierre explained.

After leaving St. Mary’s College, Pierre began taking painting more seriously. He worked as a tour guide for some time, which gave him the opportunity to sell many of his pieces to tourists. He eventually took a break from painting after switching jobs.

During the short sabbatical Pierre’s interest in his craft was re-energized when a friend approached him and inquired whether he was still into art. After replying that he did, Pierre was commissioned by the friend to create a few pieces. That moment proved to be the impetus his career needed.

“I painted a few small pieces but he immediately told me that he wanted larger pieces instead,” Pierre said. “I gave him a price of $10,000 and he asked for a discount. We agreed on a $2,000 discount and he paid me $8,000 for three pieces – just like that.”

Realizing that he had the talent to create art that attracted such hefty prices, Pierre decided that it probably wasn’t a good idea to underestimate his latent talents any longer. He continued to paint more passionately which led to another sale and another satisfied customer. Since then, that’s been the norm, he said.

While he specializes in various forms, Pierre said he first fell in love with pointillism, a labour-intensive process in which tiny dots of colour are used to create an image. Having conquered the art of pointillism, he moved on to canvas. He’s also moving towards creating more awareness for his new business, D.G.P. Arts, and plans to stage his art exhibition sometime next year.

“I’m actually in transition right now,” Pierre said. “So I’m looking for as much exposure I can get. I believe that every gift is just another means of getting to another level in your life.”

Pierre also moonlights as a barber and performing artiste — specializing in gospel, rap, soca and contemporary genres – and believes that having a talent and not putting it to good use is analogous to one being born without eyes but deciding to live with eyes closed and leaving chances to the wind.

“I believe that each of us is like a jar with specific treasures inside of us,” Pierre tells me with a straight face. “We just need to pour out whatever treasures we have by pursuing our dreams. I also believe that every house in Saint Lucia should have a piece of art. Not just mine, but at least one piece of art from any of the many artists we have in Saint Lucia. We’re all important.”

Pierre, a first-time participant in the 9th Annual Saint Lucia-Taiwan Partnership Trade Exhibition held in November, was among Saint Lucian and Taiwanese companies showcasing their goods and services and networking during the three-day event. Despite an appreciation for art – let alone purchasing works of art — not being a top priority for many locally, he said he came away with some positives.

“The exhibition has been a very good experience for me because the exposure I have received is a blessing,” Pierre said. “Art might not appeal to everybody. However, to those whom my art has been able to resonate with, they seemed very happy about it which, in turn, made me feel good. I was also able to gain new contacts and build rapport with people.”

Ever the artist to push boundaries, Pierre’s company now specializes in interior designing. This is the part where he gets his art closer to your heart so much so that you either begin to have an appreciation for art or simply fall in love with it all over again.

“I can actually walk into your home, observe the décor and paint a piece that compliments your décor and puts everything into perspective. I also offer advice on how you can create the perfect décor within a certain budget,” Pierre said.

If you’re interested in making Pierre’s works of art a priceless gem in your art collection, contact him at 712 8919 or denverpierre@hotmail.com.