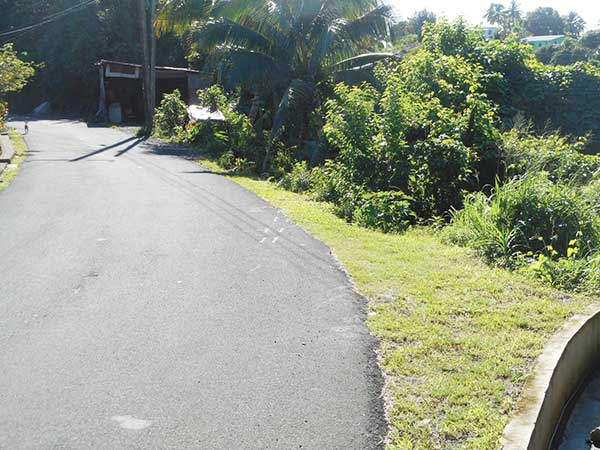 A recent traffic accident at Banse, Laborie, where a truck driver lost control of his vehicle which veered off the road and plunged down a precipice, has renewed calls by residents for the Ministry of Infrastructure to make the road safer for users.

Over the years, there have been several accidents at a particular bend along the road where people have narrowly escaped death. The situation is of grave concern to residents of the area, especially those living near the bend.

The residents suggest that barriers, signage and speed bumps be placed along certain parts of the road.

According to the residents, the accidents are caused mainly by people who drive at breakneck speed along the winding road, and people from other communities who are not familiar with the roads in the area.

They say the road has gotten more dangerous since it was rehabilitated earlier this year.

Nicholas Alexander, a resident who lives opposite the bend said : “The drivers, especially the young men, drive along the road at high speeds, putting our lives in danger…They have good road so they drive like they’re mad”

He added that if the situation is not addressed sooner, rather than later, it may result in fatalities because people are always on the road.

“Sometimes the vehicles travel so fast that it may be difficult for pedestrians to get off the road in time to avoid being hit…,” Alexander said.

Ann Mathurin, another resident said: “The road has become very dangerous. Some people drive along it without due care and attention…They don’t even drive on their sides….”

She said she is worried about the safety of children in the area who wander along the road.

Nigel Dickson said the problem is of serious concern to residents who need to speak out aloud of their concerns, as it relates to the safety of the roads in their community.

According to him, residents can also play a part in ensuring their safety while using the roads.

“The community can undertake a tree planting project, by planting trees at the edges along certain parts of the road considered to be dangerous…”Dickson said.

He said such a problem should have been taken care of during the rehabilitation of the road.

Dickson went as far as suggesting that the community should change its voting pattern.