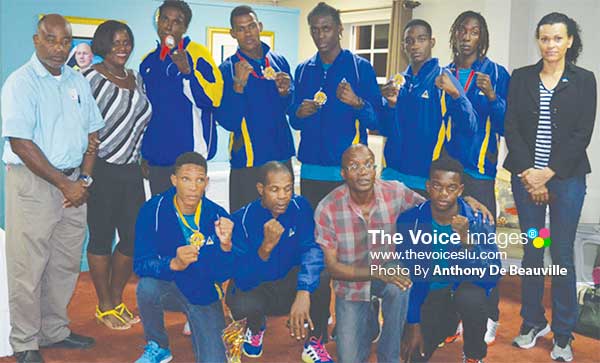 SAINT Lucia’s Omar Christopher captured the only gold medal for his country and was voted the Best Junior Boxer with two wins when the curtains came down on the Caribbean Development Boxing Tournament held at the Sea Rocks Dome in Maxwell, Barbados last weekend.

Enroute to winning the Best Boxer of the Tournament Christopher won his first fight on a unanimous decision and the other via a Technical Knockout.

Speaking at the welcome ceremony, the permanent secretary in the Ministry of Sports Donovan Williams said

: “It is always good to be able to welcome people who are being successful; there is no point competing if you are not going to be successful. You coming back to Saint Lucia and having made the country proud again is something to celebrate”.

He continued: “We are seeing the fruits of your performance and determination at the recently held Championships. Saint Lucia won the Junior Boxer of the tournament and that is a significant achievement and a lot to be proud of; also see it as just the stepping stone. There are many other championships and targets you can reach. Together with your National Association and the Ministry of Youth Development and Sports we will find ways to help you get there”.

Williams said next year would be a hectic one for boxing in Saint Lucia. “In fact we will play host to one major regional championships. It’s going to be a time where the spotlight and the profiles will be on boxing and it will be an opportunity for you now to continue to show what you can achieve in the sport”.

Head Coach of the Saint Lucia team, Conrad Fredrick said the national team’s performance at the Caribbean Development Boxing Championships in Barbados last week had enhanced their reputation as a regional competitor to be reckoned with and set the stage for more achievements in 2017.

Fredrick was full praise for the entire team, but singled out Christopher for his outstanding performance.